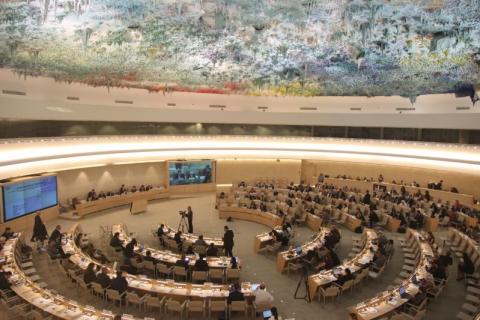 On June 18, 2019, Alkarama has submitted its shadow report ahead of Kuwait’s upcoming third Universal Periodic Review (UPR) before the UN Human Rights Council that is scheduled to take place in January 2020. The UPR, which is held every four to five years, is a peer-review mechanism during which UN Member States assess each other’s human rights records and make recommendations based on the principles enshrined in the Universal Declaration of Human Rights. In its report, Alkarama formulated a total of 25 recommendations to the Kuwaiti authorities aimed at improving its human rights record.

Ahead of the review, non-governmental organisations are invited to provide information which can be referenced by any of the states partaking in the interactive discussion. In its report[IO1] , Alkarama assesses the implementation of recommendations accepted by Kuwait during its previous UPR, and also reflects on the significant deterioration of human rights in the country since 2014.

Restrictions to the right to freedom of expression

The right to freedom of expression have deteriorated since the last UPR in 2014. In 2015, Kuwait introduced its cybercrime law, which has been used to crackdown against human rights activists, journalists, peaceful opponents, or ordinary citizens. Moreover, citizenship revocation has increasingly been used Kuwait against peaceful dissidents and political opponents. Alkarama has documented 33 such cases over the past years.

Furthermore, in its report, Alkarama expressed concern over the new Communication Law No. 37/2014 which aims at controlling the content of information displayed in the media.  It is on this basis that in 2015, Kuwait has revoked the license and closed Al-Watan TV channel allegedly stating that they “do not meet their financial and commercial requirements to keep their license to publish and broadcast”. However, the real reason behind this decision is clearly political.

Impediments to the right to peaceful assembly

Since the last UPR, Alkarama Alkarama has documented several cases of violation to the right to freedom of peaceful assembly. In particular, in July 2018, it requested the urgent intervention of the United Nations Special Rapporteurs on freedom of expression and peaceful assembly in the case of 20 MPs and opposition activists who were handed their final sentences by the Court of Cassation on July 8, 2018 for a peaceful demonstration held in 2011. This decision is political in nature and designed to prevent peaceful dissidents from carrying out any political activity in Kuwait.

Of the 70 individuals accused in this case, 15 were found guilty and sentenced to up to three and a half years in prison with labour, 35 were put on probation for a year and required to pay 1000 Kuwaiti Dinars (3,300 USD) as a guarantee of good behaviour, and 20 were acquitted.

Among those handed the highest custodial sentence of three and a half years with labour are leader of the opposition Musalam Al Barrack and other serving politicians, including the parliamentary human rights panel’s rapporteur Waleed Al Tabtabaie. Both were convicted of acts clearly falling within their fundamental rights to freedom of expression and peaceful assembly, including, “participating in a demonstration on the highway”, “organising and calling for a demonstration on the highway” and “participating in an assembly consisting of more than five people with the intention of committing ‘unlawful assembly’ and in violation of public security by crowding the highway”.

Alkarama’s report also sheds light on the situation of stateless persons, also known as the “Bidoon”, who suffer from numerous forms of discrimination. Alkarama is also concerned about violations of the rights of children and women as children of Bidoon born in Kuwait cannot obtain citizenship; whereas women married to Bidoon or men with non-Kuwaiti nationalities cannot pass their citizenship to their children.

Alkarama’s report expresses concerns over the fact that Kuwait has not yet ratified important human rights documents such as the Rome Statute, the International Covenant on the Protection of Persons from Enforced Disappearances, two conventions concerning stateless persons, the optional protocols to the International Covenant on Civil and Political Rights, and the Optional Protocol to the UNCAT on the creation of a national preventive mechanism.

Lack of independence of the NHRI and judiciary

Although Alkarama welcomes Kuwait’s establishment of a national human rights institution (NHRI) in 2015, it remains concerned over its lack of independence as its members are selected by the council of ministers and approved by the Emir. To date, the NHRI has proved to be unable to provide sufficient assistance for victims of human rights violations.

In addition, Alkarama is also highly concerned over the lack of independence and impartiality of the judiciary as the nomination of judges is approved by the Emir. Moreover, Alkarama has documented several cases of unfair and politicised trials over the past years.

The capital punishment and the practice of torture

Alkarama’s report highlights the fact that the death penalty continues to be applied even in cases in which the crimes are not the “most serious” as per international human rights standards.

In addition to that, Alkarama is concerned over the absence of a clear definition and proper criminalization of torture in domestic legislation. This is all the more problematic considering the absence of sufficient legal safeguards and complaining mechanisms to report cases of torture in detention facilities.