Jordan: On the Use of Torture by Jordan Intelligence Services... 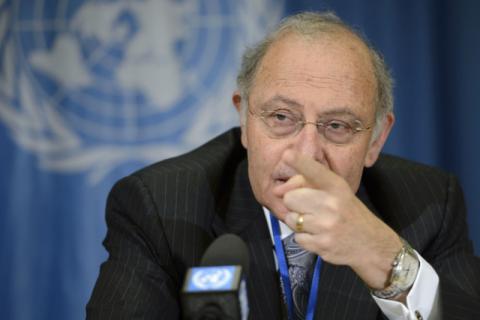 On 23 October 2015, Alkarama sent its shadow report on the use of torture in Jordan to the United Nations Committee against Torture (CAT), in view of the country's upcoming review by the Committee during its 56th session. Despite recognising that several positive steps were taken by the Jordanian government since its last review in 2010, Alkarama report highlights that torture and other ill-treatments in Jordan continue to be used, especially by the Jordanian intelligence services who systematically arrest, detain and torture opposition figures, peaceful protesters and media workers under the Anti-Terrorism Law, with the aim to provide the State Security Court (SSC) with "confessions" that will then be used as an evidence.

Intended to provide the CAT's 10 independent experts with alternative information for their assessment of Jordan's National Report on the implementation of the Convention against Torture (UNCAT) and previous CAT recommendations, Alkarama's report also formulates several recommendations to the Jordanian authorities to address these issues.

Lack of an appropriate prohibition and criminalisation of torture

Since Jordan's last review by the Committee against Torture (CAT), the State enshrined the prohibition of torture in its Constitution. Moreover, Article 208 of the Jordanian Penal Code, which defines and criminalises torture, was amended in January 2014 to remove the term "illegal torture", as recommended by the Committee in 2010. According to Article 208, however, whereas Article 4 of the Convention demands that torture be punished "by appropriate penalties which take into account their grave nature," its perpetrators in Jordan only face a penalty of six months up to three years of imprisonment, penalties which would usually be to punish a misdemeanour but which cannot be considered appropriate for the crime of torture, nor have a deterrent effect.

The abuses committed under the Anti-Terrorism framework

Of particular concern is Jordan's Anti-Terrorism Law No. 55 of 2006 amended in June 2014 to broaden the definition of terrorism to include non-violent acts, which should not be qualified as such, as expressed by the UN Special Rapporteur on Human Rights and Counterterrorism (SR TERROR)in its 2009 Report: "the definitions of terrorist crimes should be confined exclusively to activities that entail or are directly related to the use of deadly or serious violence against civilians."

In Jordan, however, the charge of terrorism is often used by the General Intelligence Directorate (GID) − mandated to investigate threats to national security and directly controlled by the King − to arrest and detain people simply for exercising their fundamental rights to freedom of opinion and expression or peaceful assembly, before bringing them to the State Security Court for allegedly "disturbing the public order" or "relations with a foreign country," or even "promoting their [terrorist] ideas."

This is the case for instance of Amer Jamil Jubran, an activist for the Palestinian cause and an anti-war advocate who frequently expresses his political opinion on social media. Arrested in May 2014, detained incommunicado and tortured at the GID headquarters, Jubran was charged with a series of terrorism-related offences which included conducting "acts that threaten to harm relations with a foreign government" and sentenced on 29 July 2015 to 10 years in prison with hard labour.

Extraction of confessions under torture used as evidence during trials

Individuals held at the GID's headquarters − in Amman's Jandawil district in Wadi Sir − are often detained incommunicado, a situation which is particularly conducive to torture. There, people are often tortured with the aim to extract confessions that will later be used as evidence during trials before the State Security Court (SSC) − a special tribunal which, despite previous recommendations by the UN Human Rights Committee (HRC) and the Committee against Torture (CAT) to abolish it due to its lack of independence, remains the competent forum for prosecution of cases of terrorism.

A prevailing impunity for acts of torture

These acts of torture remain largely unpunished due to the existing loopholes in the complaint and judicial mechanisms in charge of adjudicating allegations of torture, both lacking independence from the government. For instance, the Police Court, which is competent to try officers of the Public Security Directorate (PSD) − comprised of the police, prison and border services and falling under the authority of the Ministry of Interior − is composed by a majority of judges appointed by the Director of the PSD itself. Moreover, Jordan's complex and opaque legal regime makes it difficult to clearly establish which court would have jurisdiction over members of the GID. The fact remains that no member of the GID has ever been prosecuted and sentenced for allegations of torture, nor any police officer ever been convicted for acts of torture under article 208 of the Penal Code.

The issues mentioned above are just a few of the many concerns Alkarama shared with regards to the practice of torture in Jordan. The issues raised must be addressed as a matter of priority in order to put a definitive end to the practice of torture in the country. If the authorities are really willing to reach the definitive end of torture, as it had manifested its intention when it accessed the UN Convention against Torture (UNCAT) in 1991, it should, among others, to:

Addressing these issues is essential to ensure that torture is banned and the rule of law respected in the country. "The authorities must be reminded that considerations of "national security" can never justify departure from the absolute prohibition of torture or cruel, inhuman or degrading treatment, nor be used as a tool of repression against those who only peacefully express their views," recalls Inès Osman, Alkarama's Legal Officer for the Mashreq region.

Alkarama hopes that the concerns raised in its shadow report will be addressed constructively during the dialogue between the Committee against (CAT) and the State Party's representatives, in order to put an end to torture and other grave violations of human dignity. For a comprehensive view of Alkarama's concerns please read/refer to the Report sent to the CAT which is available online here.