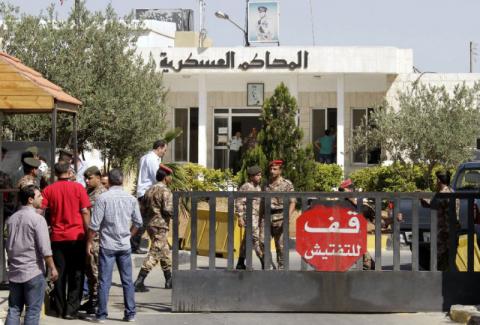 The United Nations Working Group on Arbitrary Detention (WGAD) has recently released its Opinion on the case of Adam Al Natour, a 21-year-old Polish and Jordanian student who was sentenced to four years of imprisonment by the State Security Court after a flawed trial during which confessions he was forced to sign under torture were used against him. In the decision, the UN experts qualified his detention as "arbitrary" and requested the Jordanian authorities to immediately release him and to open an investigation into his allegations of torture.
On 12 August 2015, Adam Al Natour was helping his father in his garage in Al Bayader, Amman, when 15 members of the General Intelligence Directorate (GID) – the country's intelligence agency – arrested him. He was then took to the GID premises where he was detained incommunicado for three weeks. When he was finally allowed to meet with his father, he reported having been beaten and subjected to electric shocks.

On 28 September, Al Natour was transferred to Muwaqqar prison II outside Amman. A few days later, he was forced to sign a paper written in Arabic, a language he does not understand nor speak, before the General Prosecutor of the State Security Court (SSC), who sits at the GID premises. In late October 2015, he was indicted on the basis of the Anti-Terrorism Law No. 55 of 2006 and referred to trial before the SSC. It is only a week before his first hearing in mid-November 2015 that he was allowed to contact his lawyer for the first time.
On 15 February 2016, Al Natour was sentenced by the State Security Court to four years of imprisonment under the Anti-Terrorism Law for "joining an armed group and terrorist organization" on the sole basis of the statements he signed under torture and after a trial held in a language he does not understand. In protest against his arbitrary imprisonment, Al Natour carried out a five-week long hunger strike in March 2016 which only resulted in him being placed in solitary confinement, additional beatings and incommunicado detention. On 14 March 2016, Al Natour's lawyer submitted an appeal to the Cassation Court which was rejected on 29 August 2016.

Concerned over the arbitrary character of his detention, Alkarama raised Al Natour's case with the Working Group on Arbitrary Detention (WGAD) in June 2016, calling upon the five UN experts to qualify his detention as arbitrary and request his immediate release. The Opinion on Al Natour's case was adopted on 26 August 2016, during the Group's 76th session, despite the Jordanian authorities' refusal to collaborate with the WGAD.

In their decision, the UN expert qualify Al Natour's detention as arbitrary based on the fact that he was "arrested without a warrant and without being informed of the reasons for his arrest or charges against him or being promptly brought before a judge", "denied unhindered communication with his lawyer or the assistance of an interpreter during trial", and "convicted exclusively on the basis of confessions obtained under torture", all violations of fair trial rights enshrined in the International Covenant on Civil and Political Rights (ICCPR) to which Jordan is party since 1975. The experts concluded that "as the State Security Court does not meet the fundamental principles of independence and impartiality, it fails to uphold Mr Al Natour's right to a fair and public hearing by a competent tribunal in the determination of any charge against him" and, echoing the Committee against Torture (CAT) recommendations, demanded that this special court be abolished.

Furthermore, the UN concluded that Al Natour was subjected to coercive measures amounting to torture in violations the Convention against Torture (UNCAT) Jordan ratified in 1991 and that guarantees to ensure that no evidence obtained under torture be admitted in court were violated. The UN experts therefore demanded the Jordanian authorities to open a prompt and independent investigation into Al Natour's allegations of torture and to release him immediately.

"We hope that thanks to the WGAD's intervention Al Natour will be released as soon as possible and his right to compensation will be enforced," says Inès Osman, Alkarama's Legal Officer responsible for Jordan. "The Jordanian authorities must put an end to the alarming pattern of violations of the rights to fair trial and torture committed in the name of 'counter-terrorism' as Adam's case shows and ensure instead that all fundamental guarantees are afforded to individuals deprived of liberty and that the recommendations issued by the Committee against Torture (CAT) in its last review of the country in 2015 be implemented as a matter of urgency."