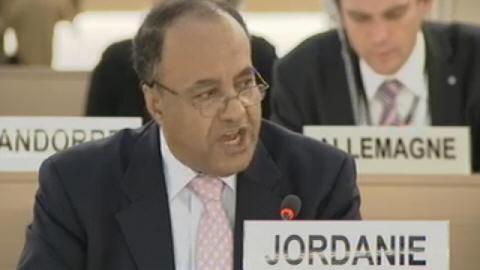 Today, the report on the second Universal Periodic Review (UPR) of the human rights situation in Jordan was adopted by the UPR Working Group of the UN Human Rights Council. In view of the Jordanian authorities' failure to fully implement many of the recommendations made during its first review in 2009, a number of recommendations were repeated. Many of these recommendations again enjoyed the support of Jordan, but some crucial suggestions were unfortunately refused. Alkarama, the Amman Center for Human Rights Studies and CIVICUS urge the Jordanian authorities to accept outstanding recommendations and ensure that steps are taken to implement those accepted.

During its 24 October review, Jordan was commended for its progress in the field of the protection of persons with disabilities and the integration of many provisions of international law into domestic legislation. Positive steps include measures taken to combat human trafficking. Many States also acknowledged Jordan's challenges as a country neighbouring Syria.

With regard to gender equality, Jordan received many recommendations asking the authorities to continue efforts to increase the representation of women in political life. A recommendation to amend the existing electoral law to ensure proportional representation of all Jordanians was, however, refused. Jordan also accepted to take further steps to protect women from domestic violence, but refused to withdraw reservations from a number of articles of the CEDAW and to amend the Citizenship and Nationality Law to enable Jordanian women to pass on their nationality to their children and spouses on an equal basis with Jordanian men.

Some of Jordan's recommendations from 2009 were implemented: demonstrations no longer require prior authorisation and the State Security Court's competencies were reduced. But as raised by a variety of States, freedom of peaceful assembly and association is still limited by measures such as extensive reporting obligations imposed on civil society organisations, especially with regard to funding. The trial of civilians before the State Security Court also remains of major concern. Moreover, as pointed out by many States, the 2012 amendments to the Press and Publications Act severely restrict the right to freedom of expression and opinion, rather than creating a conducive environment for journalists and publishers.

The combat against torture and Jordan's shortcomings in fighting impunity for acts of torture and ill-treatment was also raised a number of times, particularly concerns about the lack of effective complaint and protection mechanisms, as well as the absence of investigations into allegations of torture.

We are pleased that Jordan, despite challenges, has accepted many recommendations with regard to the promotion of freedom of expression and even supported the Netherland's recommendation "to adopt further law amendments to abolish the State Security Court or, at a minimum, ensure that civilians are not tried for crimes not listed under the jurisdiction of the court, and to either release political activists in detention or try their cases in civilian courts." We however regret that Jordan refused recommendations to abolish the death penalty and to ratify the Optional Protocol of the Convention against Torture, despite the evident need to work on these topics.

Concerning specific recommendations to promote and protect freedom of association, such as Canada's suggestion to "[t]ake measures to foster an enabling environment for civil society, including by amending the Societies Act to remove the restrictions on the establishment of civil society organisations, eliminate the role of government in civil society organisations, including in appointing state employees to newly established CSOs, remove the requirement for Cabinet approval of foreign funding for civil society organizations as well as any other undue restrictions and controls by the Government on CSOs," we hope that the Jordanian authorities will take the opportunity of the adoption of the outcome document by the UN Human Rights Council in March 2014 to accepting related outstanding recommendations, as we consider these issues to be crucial for the promotion and protection of human rights in the Kingdom.

Alkarama, the ACHRS and CIVICUS will continue to monitor the implementation of Jordan's recommendations and look forward to working all stakeholders to improve the human rights situation in the country.