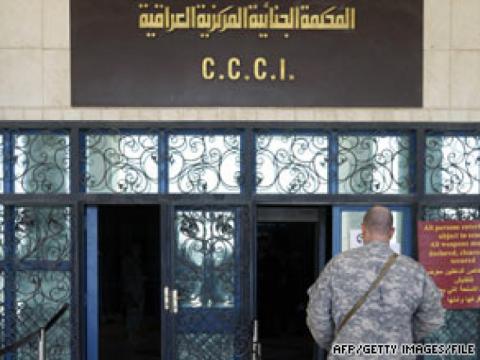 On 15 April 2015, Alkarama sent a communication asking the United Nations Working Group on Arbitrary Detention (WGAD) to call upon the Iraqi authorities to immediately release 17 people arrested for their real or perceived link with former Vice President Tariq Al Hashimi. Secretly detained and tortured, they have all been accused of acts of "terrorism" and sentenced to death by the Central Criminal Court of Iraq on the basis of their forced confessions.

"These cases of arrest and detention targeting persons working for or perceived as close to former Vice President Tariq Al Hashimi clearly show a pattern of politically motivated persecution carried out through arbitrary detention, torture and death sentences pronounced under the Anti-terrorism Law," states Inès Osman, Alkarama's Legal Officer for the Mashreq. In February 2015, the UN Assistance Mission in Iraq (UNAMI) and the Office for the High Commission for Human Rights (OHCHR) observed in their Report on the judicial response to allegations of torture in Iraq that "the authorities were inclined to apply anti-terrorism legislation in cases that had no connection to terrorism," and expressed their "particular concern as defendants convicted under article 4 of the Anti-Terrorism Law no.13 of 2005 face the death penalty."

Background: a campaign of mass arrest on political grounds

In December 2011, in fact, the Iraqi Security Forces, under the orders of former Prime Minister Al Maliki, raided the house of Tariq Al Hashimi, a leading member of the secular Al Iraqiya coalition, and critical voice of what he saw as Al Maliki's attempts to centralise power. Not finding him at home, the Security Forces arrested dozens of his relatives and members of his staff instead.

Members of his security personnel – on behalf of whom Alkarama wrote to the WGAD on 5 August 2014 – were arrested, arbitrarily detained and tortured to extract confessions that were then used as evidence to sentence them to death on the basis of the Iraqi Anti-Terrorism Law mentioned above. Meanwhile, the security services, tightly controlled by former Prime Minister Al Maliki, continued to arrest dozens of Al Hashimi's staff, amongst which the 17 following victims. Between November 2011 and March 2012, all members of Al Hashimi's personal staff were abducted:

That same wave of arrests targeted friends and relatives of people working for Al Hashimi, including:

All the victims referred to the WGAD by Alkarama are currently all detained in poor and inhumane conditions, pending their appeal.

Following their respective arrests between November 2011 and March 2012, they were all taken to secret locations and prevented from contacting their families and lawyers for several months. They were severely tortured – including rape for one of them –, in order to force them to sign incriminating confessions that were later used as the sole source of evidence during their trial. The forced "confessions" of some of them were even broadcasted on Iraqi public TV, in violation of the principle of presumption of innocence.

After heavily flawed trials, they were all sentenced to death by the Central Criminal Court of Iraq (CCCI) under the repressive Anti-Terrorism Law No.13 of 2005. The CCCI has been widely denounced for not meeting international standards of due process and fair trial. As it happened in these cases, it regularly occurs that defendants brought before this court are not provided with effective means to defend themselves, which is of utmost gravity especially when considering that this jurisdiction normally relies on the sole testimonies of secret informants or confessions extracted under torture.

Alkarama also raised its concern over the reprisals – in the form of arbitrary arrest and detention – carried out against lawyers for having represented individuals related to Al Hashimi's case. On November 2012, 47-year-old lawyer, Ziad Ghanem Shaaban Al Naseri, was arrested and detained for one week in the Anti-Terrorism prison in Tikrit. Five months later, on 31 March 2013, it was the turn of 57-year-old lawyer, Mouayad Obeed Al Ezzi, to be notified that an arrest warrant had been issued against him by the Central Investigating Court in Al Karkh on the basis of article 4 of the Anti-Terrorism law, a warrant that was revoked three months later by the same court.