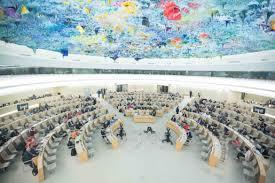 On March 28, 2019, Alkarama submitted its shadow report ahead of Iraq’s upcoming Universal Periodic Review (UPR) before the UN Human Rights Council. The UPR, which is held every four to five years, is a peer-review mechanism during which UN Member States assess each other’s human rights records and make recommendations based on the principles enshrined in the Universal Declaration of Human Rights. In November 2019, Iraq will be reviewed under this mechanism for the third time.

Ahead of the review, non-governmental organisations are invited to provide information which can be referenced by any of the states partaking in the interactive discussion. In its report, Alkarama assesses the implementation of recommendations accepted by Iraq during its previous UPR, and also reflects on the deterioration of human rights in the country since 2015.

Alkarama’s report is particularly focused on the systematic practice of enforced disappearance, arbitrary detention, torture and summary executions in a country torn by internal division and regional turmoil. The report also highlights the misuse of the Iraqi anti-terrorism law of 2005 as well as the reprisals against human rights activists, journalists, and members of opposition groups.

In its report, Alkarama raised concern over the fact that Iraq has failed to implement the recommendations from the previous UPR, or the Committee on Enforced Disappearances (CED). These include the prohibiting and criminalising enforced disappearance, identifying and closing secret prisons, and investigating the thousands of cases of disappeared persons.

In recent years, Alkarama has submitted 150 cases to the CED, the vast majority of which have yet to be clarified by the authorities. Among these were also cases of human rights activists, journalists, as well as Sunni civilians targeted because of their sectarian affiliation.

The misuse of the Anti-Terrorism Law, the practice of arbitrary detention and the capital punishment

The Iraqi Anti-Terrorism Law of 2005, with its vague provisions, has constituted the basis of arbitrarily arresting and detaining thousands of individuals, including peaceful opponents and human rights defenders. Moreover, individuals charged under this legislation are systematically subjected to unfair trials during which confessions extracted under torture are admitted as evidence, before being sentenced to death and possibly executed.

In its report, Alkarama expressed concern over Iraq’s non-compliance with its domestic legislation as well as international obligations regarding due process and fair trial guarantees. In fact, individuals are sometimes kept in secret detention for years, or detained without being brought before a judge.

In addition to that, since the last UPR, Iraq has continued to enforce death sentences and carrying out executions of a large number of people. Iraq has been called several times by the Human Rights Committee and Human Rights Council to put an end to arbitrary and summary executions in the country. However, on the contrary, Iraq has introduced new amendments allowing for the implementation of executions without the president’s approval, which allows for a faster implementation of death penalties issued following flawed and unfair trials.

Alkarama’s report has reiterated the fact that torture is systematic in Iraq, as the current legislation lacks a definition of torture that is in line with international human rights standards.

Moreover, Alkarama found that the existence of secret detention facilities and the practice of enforced disappearances constitutes a breeding ground for the practice of torture which is also used during interrogations to extract confessions.

Confessions made under torture are used as the sole evidence during heavily flawed trials. Meanwhile, perpetrators of torture are never brought to justice.

Alkarama brought to the attention of the Council the draft cybercrime law which is currently under consideration by the Iraqi parliament and that would allow wider restrictions to the right to freedom of expression. The draft legislation includes vague provisions which would allow the authorities to prosecute individuals for crimes such as the violation of any “religious, moral, family or social principles or values” or “harming the reputation of the country”, the latter of which carries a life prison sentence.

In addition to that, the report highlights the increased restrictions and reprisals practiced against human rights activists and journalists, including for reporting on human rights violations.

In its report, Alkarama formulated a total of 25 recommendations, among other things, that Iraq amends its penal code as to criminalise enforced disappearance, incorporate a definition of torture in line with international standards, and amends the anti-terrorism law. Moreover, Alkarama called on the Iraqi authorities to halt the issuance of death penalties, summary executions and put an end to the practice of arbitrary detention. Lastly, Iraq should ensure the protection of the right to freedom of expression and free all imprisoned journalists and peaceful activists.