Egypt: A Decade of Revolution ... A Dark Decade for Human Rights 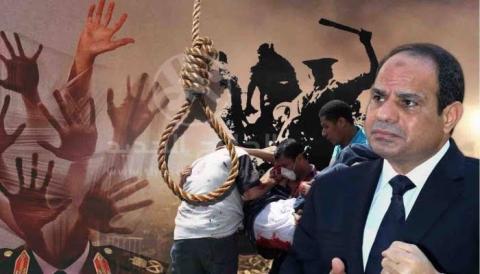 Egyptians are living the tenth anniversary of the songs of the revolution: "Live - Freedom - Social Justice", those songs and crowds that represented a lifeline out of the state of political tyranny and overthrow former president Mohamed Hosni Mubarak, allowed the Egyptian people to move towards democracy by electing President Mohamed Morsi as the first democratically elected civilian president outside the military establishment. But the change did not last long and the country has entered a dark tunnel since the military coup led by current President Abdel Fattah Al Sissi. Prisons were filled with political detainees and massive human rights abuses were committed by the returning dictatorship.
However, this seems to be the first time that calls for protest are absent from the streets to commemorate the January 25, 2011 revolution, in conjunction with strict security measures in the capital Cairo and the rest of the governorates. Egyptian Prime Minister Mostafa Madbouly decided to refer certain crimes from the prosecution to the State of Emergency Security Courts on the eve of the January 25 anniversary and according to what was published in the Official Gazette, these crimes included: gathering, disrupting transportation, intimidation, threatening and disrupting public order. The Egyptian Parliament approved a few days ago the decision to extend the state of emergency throughout the country for a period of 3 months for fear of any demonstrations denouncing the poor living conditions and the darkening of the political scene in the country.
As the tenth anniversary of the January 25 revolution approached, security forces launched a campaign to arrest citizens and search their phones in the streets of Cairo, as documented by human rights sources, but some attribute the lack of celebrations of the anniversary of the revolution to precautionary measures in the fight against the Corona pandemic, as the virus is spreading throughout the country already in need of health facilities, shortage of medical supplies and lack of health care, especially in prisons and detention centers.
Over the past ten years, Alkarama has followed the alarming and horrific deterioration of the human rights situation in Egypt. Alkarama has submitted dozens of individual complaints to the United Nations human rights special procedures and has also submitted reports to the Universal Periodic Review on the human rights situation in the country.
For example, on 28 March 2019, Alkarama submitted its shadow report to the UN Human Rights Council, in which it focused on the systematic practice of arbitrary detention and torture, and highlighted the widespread crime of enforced disappearance, as well as the vague and incomplete anti-terrorism law of 2015 which legalized the systematic repression of human rights activists, journalists and peaceful dissidents.
Alkarama also expressed concern about the use of the death penalty as a means of repressing dissenting voices and those exercising their fundamental right to freedom of expression, as well as the failure to ratify core human rights instruments and reprisals against collaborators of UN rights mechanisms.
In its report, Alkarama expressed concern that Egypt had not ratified the International Convention for the Protection of All Persons from Enforced Disappearance and the Optional Protocols to the International Covenant on Civil and Political Rights, which allow for individual complaints to the Human Rights Committee, as well as the abolition of the death penalty.
Egypt has also not ratified the Optional Protocol to the Convention against Torture on the establishment of a national preventive mechanism, nor the Rome Statute of the International Criminal Court.
In addition, the report warned against government intimidation and reprisals against activists, journalists, lawyers, and individuals cooperating with UN experts.
Regarding to the individual complaints, on 10 July 2013, Alkarama filed a complaint with the United Nations, calling for urgent intervention with the military regime to protect President Mohamed Morsi, his advisers and legitimate members of the government, from torture and demand their release.
Subsequently, the United Nations Working Group on Arbitrary Detention, composed of five independent experts, issued a resolution on 13 November 2013 calling on the Egyptian regime to release President Morsi and his companions, considering that "depriving Morsi and his advisers of their liberty is arbitrary".
Later, independent experts from the United Nations said: "The conditions in Egyptian prisons during the five years spent in Tora Prison directly led to the death of former Egyptian President Mohamed Morsi".
They said that what happened to Morsi could amount to "an arbitrary murder with the approval of the state".
The systematic policy of repression and violations in Egypt has provoked broad reactions condemning it, the most recent of which is the decision of the European Parliament which includes 19 points, the most important of which is the call for a thorough and comprehensive review of the European Union's relations with Egypt, because "the human rights situation requires serious consideration," according to the text of the resolution. The resolution also called on European Union countries to consider taking restrictive measures against senior Egyptian officials involved in serious violations.