Egypt: Alkarama Once Again Alerts the UN on the Institutionalised Practice of Enforced Disappearances 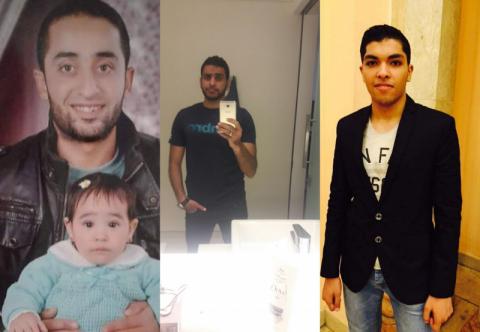 Since the beginning of 2016, Alkarama has been documenting more and more cases of enforced disappearances in Egypt to the United Nations Working Group on Enforced or Involuntary Disappearances (WGEID), including five new cases highlighted below. Omar Mohammed Ali Hamad and Mahmoud Ibrahim Mostafa Attia, have been missing since Rabaa Al Adawiya's massacre on 14 August 2013. The three other victims, Abderrahmane Elsayed Mahmoud Hassan, Basem Ahmed Shafik Ahmed and Islam Eid Zaky Karkoura disappeared respectively on 18 August 2015, 20 and 25 February 2016.

These cases are only the tip of the iceberg and exemplify a practice that has been ongoing for the past two and a half years in the country. For these reasons, Alkarama submitted in April 2016 a general allegation to the WGEID on the obstacles to the implementation of the 1992 Declaration on the Protection of all Persons from Enforced Disappearance in Egypt.

What is a general allegation?

A general allegation regarding obstacles to the implementation of the 1992 Declaration on the Protection of all Persons from Enforced Disappearance, is a submission made to the WGEID regarding violations by a specific State of the different articles of the declaration. Not only does it concern the fact of practicing enforced disappearances on a large-scale but also the lack of remedies available to victims and families and the lack of accountability for authors of this crime. On the basis of this submission and with a view to end this practice, the Working Group can then send its own general allegation to the Government that can comment on it in return.

Why is it relevant to the situation in Egypt?

When Alkarama started to receive reports of enforced disappearances committed by the Homeland Security – Egypt's main intelligence service – in mid-2014, victims of this practice were mostly connected to the Muslim Brotherhood – a group that has been targeted by the authorities since July 2013's military coup. More and more reports came throughout the months however, establishing a clear "pattern of short-term enforced disappearances" according to the WGEID's 2015 annual report. Individuals are now randomly targeted and enforced disappearances occur on a daily basis, following the victims' arrests at their homes or in the streets.

While these victims are secretly detained in Homeland Security or Security Forces facilities across the country, the authorities turn a blind eye on their illegal arrests and detention and give carte blanche to the Homeland Security regarding the victim's fate. In fact, of all cases of enforced disappearances documented by Alkarama in the past two years and a half, no officer was summoned for interrogation by the public prosecution – the only official body entitled to request such measures – and no compensation was granted to victims or their families. This is the factor that characterises the enforced nature of the victims' disappearances.

Since disappearances are not investigated, it is also extremely difficult to prove abuses committed concomitantly. In fact, virtually all victims reported having been forced to confess to crimes under torture while being secretly detained. Usually, it is after victims confess that they are brought before the public or military prosecution to be indicted and that their secret detention ends. As a consequence, many enforced disappearances' victims have later been sentenced to harsh prison sentences on the basis of confessions obtained during their secret detentions.

News cases of enforced disappearance show that the situation is worsening

Abderrahmane, Ahmed and Islam are the illustration of the randomness and institutionalisation of enforced disappearances in Egypt. On 18 August 2015, Homeland Security officers came to the grocery shop where Abderrahmane used to work, in Al Ahram Street in Cairo. Without giving any reason, officers handcuffed him and brutally removed him from the shop before taking him to an unknown place of detention. Alerted by witnesses to the scene, his relatives looked for the young man in numerous places of detention but the police have constantly denied his arrest.

Similarly, on 20 February 2016, Ahmed was arrested on 5th Avenue of New Cairo, by plainclothes officers. Although they immediately filed disappearances' complaints, his family only heard from him on 23 March 2016 when a lawyer informed them that one of his clients had seen Ahmed in the Homeland Security headquarters of Cairo where he had been reportedly subjected to torture. Hence, his relatives solicited the authorities again, as well as the Egyptian National Human Rights Council (NCHR), but to no avail.

On 25 February 2016, several men in civilian clothes carrying weapons came to 29 years old Islam's apartment in Fuwwah, a city located 143km North of Cairo. The latter, who was standing near the entrance door was immediately arrested. Later on that day, Islam's father went to Fuwwah's police station and managed to briefly see him. When he came back the following morning to visit him, the police officers stated that Islam had been taken away during the night, without any further precision. Since then, the authorities refused to disclose Islam's whereabouts, despite his family's requests.

As in most cases, it is probable that these three men are being secretly detained by the Homeland Security in an unofficial detention centre – even though this service is not entitled to arrest and detain individuals under Egyptian law – and that they will possibly reappear in the coming weeks or months. Not all victims reappear however, such as 20-years-old Omar Mohammed Ali Hamad and 37-years-old Mahmoud Ibrahim Mostafa Attia. These two men disappeared during Raba'a Al Adawiya Square massacre on 14 August 2013, events characterising a crime against humanity. Despite their repetitive steps to try to locate them, the two men's families have been left without information on their fates and no officer has ever been interrogated over their disappearance or potential death.

In light of the increasing number of enforced disappearances reported in Egypt, the multiple abuses committed during them and the widespread impunity for authors of such crimes, Alkarama asked the WGEID to promptly intervene with the Egyptian authorities regarding the systematisation of this practice in the country and to ask the authorities through a general allegation, to uphold their international obligations in this regard. Alkarama urges the Egyptian authorities to adopt a national plan to fight enforced disappearances and to open prompt, independent and impartial investigations into every report of enforced disappearance and to prosecute and punish their authors accordingly, as well as their superiors.