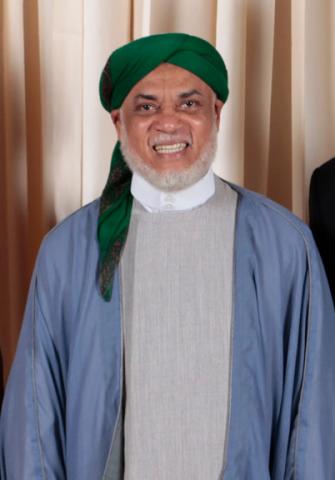 On 24 March 2021, Alkarama sent an urgent appeal to the UN Working Group on Arbitrary Detention (WGAD) in order to obtain the release of Mr. Ahmed Abdallah Mohammed Sambi (63 years old), former Head of State of the Comoros (2006-2011) who is arbitrarily detained.
Mr. Sambi had been arrested on May 19, 2018 the day after the Friday prayer in which he had participated in the mosque of Moroni and placed under house arrest on a decision of the Ministry of Interior on the pretext of "disturbance of public order."
It was only three months later, on August 20, 2018, that Mr.Sambi was brought before an investigating judge who ordered his remand in custody on a new charge of embezzlement.
Since then, he has been held at his home in Voidjou, which has become a de facto annex of the Moroni prison, pending a possible trial.

On 29 May 2018, Alkarama submitted his case to the Working Group which issued an opinion dated 19 November 2018 qualifying the house arrest of the former President as arbitrary detention and urging the Government to put an end to the flagrant violations of his fundamental rights.
However, the Working Group's opinion was never implemented. On the contrary, Mr. Sambi's situation, who is now cut off from the outside world, has deteriorated significantly.

Urgent appeal to UN special procedures
On 24 March 2021, an urgent communication was sent by Alkarama to the United Nations Special Procedures calling for the immediate release of the former Head of State, who is being held in violation of the Comorian Criminal Procedure Code and international human rights standards.
Indeed, under Article 145 paragraph 2 of the Comorian Criminal Procedure Code, the period of pre-trial detention may not exceed four months, renewable once. According to national legislation, the legal deadline for Mr. Sambi's detention thus expired on April 19, 2019. However, all requests for release made by his lawyers were systematically rejected by the investigating judge without legal grounds.
The continued detention of the former head of state is also a violation of Article 9 of the Universal Declaration of Human Rights (UDHR) which states that "No one shall be arbitrarily arrested, detained or exiled. ". However, Mr. Sambi is deprived of his liberty despite the expiry of the legal deadline provided for by Comorian law and in the absence of any judicial decision.
In "provisional" detention for more than two years, Mr. Sambi has still not been tried, in violation of article 10 of the UDHR, which provides that "Everyone is entitled in full equality to a fair and public hearing by an independent and impartial tribunal, which shall determine either his rights and obligations or the merits of any criminal charge against him. ". Mr. Sambi's "provisional" detention is ongoing and increasingly resembles a life sentence.
The former head of state was detained without prior investigation simply on the basis of a report on the Economic Citizenship Program, written by Dhoihir Dhoulkamal, Comorian Minister of Foreign Affairs.
The circumstances of Mr. Sambi's detention, as well as official statements by Comorian Justice Minister Mohammed Oussein Djamalillah in an interview with the national daily, Al Fajr, demonstrate that the detention of the former head of state is exclusively political. According to this statement, "the detention warrant of the former president is unlimited" implying that his fate does not depend on the judge but on the Comorian government.
Thus, by arrogating to itself the right to keep Mr. Sambi in indefinite detention, the executive is interfering in a judicial process and violating Article 10 of the UDHR, which gives every individual access to a fair trial.
The former head of state has no means of communication with the outside world. His right to visit is in fact subject to prior authorization by the authorities.
By refusing to allow the former president to communicate with his family, the Comoros government is flouting the minimum standards for the treatment of prisoners. Indeed, all persons placed in detention must be able to benefit from visits and have adequate means of communication.

Thus, by assuming the right to keep Mr. Sambi in indefinite detention, the executive is interfering in a judicial process and violating article 10 of the UDHR, which provides every individual with access to a fair trial.
The former head of state has no means of communication with the outside world. His right to visit is in fact subject to prior authorization by the authorities.
By refusing to allow the former president to communicate with his family, the Comoros government is flouting the minimum standards for the treatment of detainees. Indeed, all persons placed in detention must be able to benefit from visits and have adequate means of communication.
Alkarama has stated that Mr. Sambi's situation is all the more worrying given the refusal of the Comorian authorities to grant Mr. Nils Melzer, the United Nations Special Rapporteur on Torture, permission to visit him.
Indeed, from June 12 to June 18, 2019, the UN expert made an official visit to Comoros in order to assess the evolution of the situation and identify problems concerning the prohibition of torture and other cruel, inhuman or degrading treatment or punishment. During the visit, the expert planned to visit Mr. Sambi at his place of detention. However, he was denied access on the pretext that no prior request for authorization had been made.
Finally, Alkarama also stressed that Mr. Sambi's detention constitutes a violation of his right to health, as enshrined in Article 25 of the UDHR, which guarantees access to medical care.
Since his detention, the former president's health has been deteriorating. His medical certificates indicate that he has serious lung problems and other pathologies that require access to specialized care. Yet, despite requests from his family, Mr. Sambi still does not receive adequate care.
It is in these circumstances that Alkarama has submitted an urgent communication to several United Nations special procedures drawing their attention to the seriousness of Mr. Sambi's situation and calling on them to enjoin the Comorian authorities to take the necessary measures without delay to remedy this situation and bring it into conformity with the norms and principles set forth in the UDHR by putting an end to his deprivation of liberty without delay.