Alkarama launches its 2021 annual report: "Civil societies more than ever under threat" 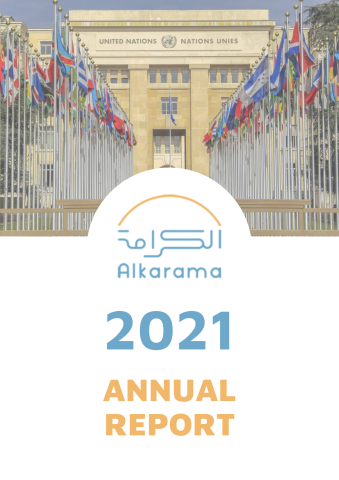 Alkarama launched its 2021 annual report for 2021, highlighting its human rights advocacy and litigation activities in the Arab world, in its four regions:  the Gulf, Morocco, the Mashreq, and the Nile.

“The events of last few years have reaffirmed the pressing need to continue the struggle for freedoms and human rights in the Arab world, particularly in face of states’ repressive policies and attempts to repress all peaceful movement against tyranny. We need to continue to support calls for political reform and for the guarantee of rights and freedoms”, said Rachid Mesli, Alkarama’s legal director.  “The circumstances in which Alkarama was founded have changed: alone in its struggle against repression a decade ago, today the Arab region is now full of brave human rights defenders, which is encouraging”.

“This annual report is a celebration of our team’s efforts, and, at the same time, is an embodiment of the spirit of defiance in the face of the repressive machinery and politics of reprisals of the authoritarian regimes in the Arab region in their confrontation with huma rights NGOs seeking justice and accountability”, he concluded.

Alkarama's annual report focuses on its main concerns over the past year in various Arab countries in various areas of activities: individual complaints to the UN special procedures, parallel and shadow reports submitted to treaty bodies, media outreach to raise awareness on human rights and end the prevailing climate of impunity.

The annual report is based on individual cases of abuses documented by the legal team on situations related to the right to life, physical and moral integrity, and liberty, and based on statements from victims and/or their relatives, information from civil society organisations or other credible sources.

The COVID-19 pandemic and counterterrorism served as pretexts and Trojan horse for Arab regimes to continue to stifle peaceful opposition and crackdown on popular movement demanding democratic change and human rights.

Reprisal policies against victims or their relatives are also one of the issues raised in the report, citing several cases, particularly in Saudi Arabia, the United Arab Emirates and Egypt.

Alkarama, an independent Swiss human rights organisation based in Geneva, was founded in 2004 to defend all victims and those threatened with extrajudicial killings, enforced disappearances, torture and arbitrary detention, and to communicate their voices to international human rights mechanisms. Alkarama seeks an Arab world in which all individuals enjoy justice and freedom under the protection of the law.