Algeria-UN: Alkarama seized the Office of the High Commissioner following the official campaign of disinformation claiming that the UN rejected a complaint against Algeria. 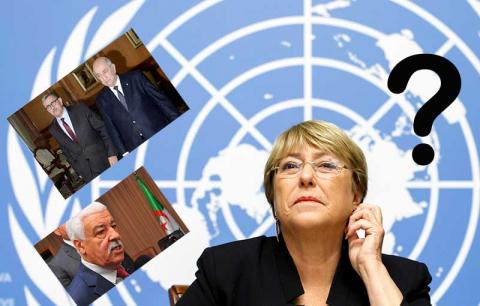 On September 4, 2020, Alkarama seized the United Nations High Commissioner for Human Rights, Michelle Bachelet, following a disinformation and denigration campaign led by the official authorities through the APS (Algérie Presse Service) and ENTV (Établissement Public de Télévision, the official channel of the Algerian state). In its urgent appeal, Alkarama called on the High Commissioner to officially deny the false information according to which a complaint filed by Algerian marchers against the authorities concerning arbitrary detentions in the country would have been "rejected". The false information relayed by various media in recent days constitutes a direct violation of the Algerian state's obligations under international law to ensure that the information they disseminate is reliable and trustworthy, including information relating to matters of general interest, in particular regarding human rights protection.

On Sunday, August 23, 2020, a group of Algerian peaceful activists marched from Chambéry, France, to Geneva in front of the Palais des Nations to protest against arbitrary detentions in Algeria. Indeed, since the popular uprising known as "Hirak" which began in February 2019, hundreds of peaceful demonstrators, bloggers, political activists, journalists and human rights defenders have been arrested in violation of Articles 9, 14, 19 and 22 of the International Covenant on Civil and Political Rights ratified by Algeria in 1989.

During the march, the participants submitted a letter to the High Commissioner calling for a condemnation of the arbitrary detentions and requesting her intervention with the Algerian authorities in order to secure their release. This letter was submitted to the reception desk of the Palais Wilson on August 23, 2020. This march as well as the letter's submission were widely covered by the media, particularly through social networks. A few days later, the Algerian authorities initiated a campaign of disinformation and denigration against the peaceful activists.

This campaign began with a press release from the APS and the ENTV official televised news of September 1st, 2020, which is available in Arabic, French and Amazigh languages. The following is the transcript of the information as announced in the French state television news:
"A statement of the secretary to the " Office of Litigation at the UN " Issam Al Mohammedi who reportedly indicated that the complaint filed by Algerian political activists against the Algerian authorities had been rejected 24 hours after its submission and examination of its contents by legal delegates of the office. The complaint was rejected for several reasons explains this official. Among these reasons are the fact that the content did not reflect the reports of the human rights organisation in Algeria, that some signatories have criminal records, that not all signatories have been resident in Algeria for a period of ten years and that the initiators of the complaint are holders of dual nationality, some of whom do not even have Algerian nationality. Al Mohammedi had stated that the rejection of the complaint reflects Algeria's ranking among Arab countries where freedom of expression and the protection of human rights are enshrined".

The information was then relayed on State TV's social networks (notably on Facebook). It was subsequently widely picked up by the Algerian and foreign press - in French and Arabic-speaking newspapers - under headlines that clearly evoked an alleged rejection by the United Nations of a human rights complaint against Algeria.

The information is based on false information: there is no "litigation office" within the United Nations whose lawyers would be responsible for dealing with complaints against states regarding human rights violations. Moreover, we were unable to identify the expert to whom the authorities refer, nor have we been able to identify the expert "Mr. Issam Al Mohammedi" who is said to be the secretary of the UN litigation office.

Alkarama stressed that the consequences of such practices are serious and must draw the attention of the Office of the High Commissioner and UN human rights mechanisms.

Moreover, the alleged reasons of the rejection are harming both UN human rights mechanisms and peaceful human rights defenders.

The reasons for rejection cited by "Mr. Al Mohammedi" - namely: "the content does not conform to the reports of the human rights organization in Algeria, some signatories have criminal records, not all signatories have been resident in Algeria for a period of ten years and the initiators of the complaint are holders of dual nationality, some of whom do not even have Algerian nationality" - have no basis. In fact, they only aim to intimidate Algerian civil society, leading it to believe that the United Nations considers that only persons of Algerian nationality, residing in Algeria and having no "criminal record" can appeal to human rights protection mechanisms, which is obviously completely false.

Furthermore, the Algerian official statement states that it would be an official UN body that would have rejected the complaint because its content - namely the denunciation of arbitrary detentions - would not be in conformity with the UN reports on the human rights situation in the country. In other words, the UN would have rejected a civil society complaint thereby denying the existence of proven human rights violations in the country. In support of this claim, the statement adds that "Mr. Al Mohammedi" would have stated that "the rejection of the complaint reflects Algeria's classification among Arab countries where freedom of expression and the protection of human rights are enshrined".

A campaign of disinformation constituting a violation by Algeria of its treaty obligations.

Alkarama argued that such a campaign constitutes a direct violation of Algeria's conventional and customary obligations to protect and respect human rights.

By claiming that the United Nations would have rejected the complaint on such grounds, this disinformation constitutes a direct obstacle to access to UN mechanisms and contradicts the state's obligations to "disseminate information, through public and private mechanisms, on all available remedies for gross violations of international human rights law.

In this regard, the “Joint declaration on freedom of expression and “fake news”, disinformation and propaganda”, (hereafter "Joint Declaration"), noted “the growing prevalence of disinformation (sometimes referred to as “false” or “fake news”) and propaganda in legacy and social media, fuelled by both States and non-State actors, and the various harms to which they may be a contributing factor or primary cause”.

Alkarama recalled that only the existence of a free, independent and diverse press is the best way to prevent misinformation. As recalled by the “Joint Declaration”: States have a positive obligation to promote a free, independent and diverse communication environment, including media diversity, which is an essential means of combating misinformation and propaganda. However, the arrests and heavy sentences handed down to journalists and peaceful activists, as well as the recent criminalization of the publication of "false news" or criticism of state officials, show that far from enshrining human rights, the Algerian authorities are increasing restrictions on fundamental freedoms.

This official disinformation campaign directly echoes the concerns expressed by the authors of the Joint Declaration that “disinformation and propaganda are often designed and implemented so as to mislead a population, as well as to interfere with the public’s right to know and the right of individuals to seek and receive, as well as to impart, information and ideas of all kinds, regardless of frontiers, protected under international legal guarantees of the rights to freedom of expression and to hold opinions”.

Similarly, by denigrating the authors of the letter as “binationals” who no longer live in Algeria or do not hold Algerian nationality, or people with "criminal records", this disinformation damages the reputation of Algerian peace activists abroad, denying them any legitimacy to denounce violations committed in their country. It also constitutes a form of intimidation against them because of their collaboration with the United Nations human rights protection mechanisms.

This is all the more concerning given that political and human rights activists, as well as independent journalists, are regularly accused by the authorities of "spreading false news" or "serving foreign interests". This campaign is a blatant example of the practices denounced in the Joint Declaration according to which, "public authorities denigrate, intimidate and threaten the media, including by claiming that the media are 'opposition' or 'telling lies' and have a hidden political agenda, which increases the risk of threats and violence against journalists, undermines public confidence in journalism and can mislead the public by blurring the lines between misinformation and media content that includes independently verifiable information.

Alkarama therefore recalled that the Algerian authorities “make, sponsor, encourage or further disseminate statements which they know or reasonably should know to be false (disinformation) or which demonstrate a reckless disregard for verifiable information (propaganda)”. They must also “in accordance with their domestic and international legal obligations and their public duties, take care to ensure that they disseminate reliable and trustworthy information”.

A statement  on UN Human Rights office was published on that subject.