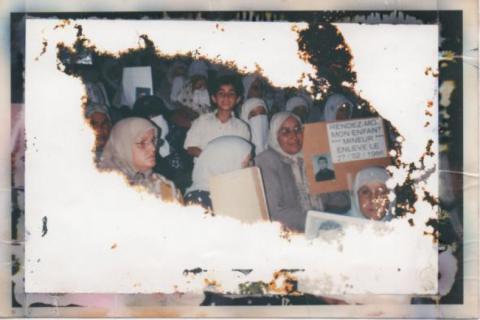 At around 2.20am on the 28th of February 1996, Mohamed Lamine Nateche, a 16-year-old boy, was abducted by agents from the police station near his grandparents' home in Hussein Dey, in the suburbs of Algiers. He often spent the night there as the house was close to his school. Thereafter, he was taken to Bourouba police station.

As soon as the curfew ended, Mohamed's parents went to Hussein Dey police station. Police told them: "Bring us back his uncle and we'll give you back your son". One of the agents, an acquaintance of Mohamed Lamine's parents, told them that their son had been taken "to prison" and had left the police station.

The schoolboy's family took all possible measures in their attempts to find him. They went around every police station they could and reported the kidnapping to the Prosecutor of the Republic, but to no avail.

A year after the victim's disappearance, his family received several unconfirmed reports that he had been seen at a secret detention site near the El Harrach district, most likely a military barracks or a Department of Intelligence and Security (DRS) detention centre.

Nevertheless, the police, the DRS and the army have continued to deny Mohamed Lamine Nateche's detention.

The "national reconciliation" policy: compensation in exchange for death certificate

Following the introduction of the Charter for Peace and National Reconciliation in 2006, Mohamed's parents were summoned to receive "compensation". They were presented with a death certificate and a document which they should sign to receive the compensation. The parents refused to sign the document, wanting to know the reasons for and the circumstances surrounded their son's presumed death. In the face of silence from the police, they left. Two years later, they were summoned a second time: once again, they refused to sign the document affirming the death of their son and asked for light to be shed on their son's fate.

Mohamed Lamine Nateche's family have had no news of their son for 17 years and do not know whether he is dead or alive. The authorities have always refused to admit he was detained and then probably executed.

As part of the process of "national reconciliation", the Algerian authorities agreed to compensate the families of the missing provided they sign a document confirming the death of their missing relative, without any information about the circumstances surrounding the death, or the return of the victim's body to the family.

The authorities cannot simply produce a death certificate in place of their duty to shed light on the thousands of disappearances carried out by the Algerian security services during the "Black Decade". It is the Algerian authorities' duty to lead an investigation into the circumstances of their disappearance and, if the death is confirmed, to return the body to the family.

Today, Alkarama, who continue to receive reports of numerous victims who disappeared during the 1990s, submitted Mohamed Lamine Nateche's case to the UN Working Group on Enforced Disappearances.