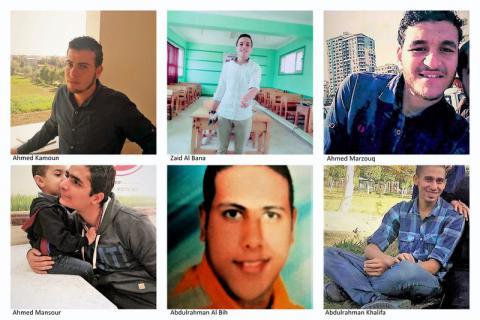 On 25 January 2017, Alkarama alerted the United Nations Working Group on Enforced or Involuntary Disappearances (WGEID) of the abduction of seven students – ranging from 16 to 22 years old – by the State Security between October 2016 and January 2017. Despite their families’ numerous attempts to clarify their fate and whereabouts, the authorities continue to deny their detention.

The students were all arrested by State Security forces in plainclothes, sometimes accompanied by Police agents in uniforms, who did not present any warrant nor explained the reasons for the arrests. These abductions were carried out in some cases in schools or university campuses, and in front of students and teachers, while in other cases, heavily armed security agents stormed university dorms or students’ parental homes during the night. Following their sons’ abductions, parents went to different police stations and sent several telegrams to the relevant authorities, however, they faced a constant refusal to disclose the students’ fates and whereabouts.

Cases documented by Alkarama show that torture is systematically practiced against victims of enforced disappearance, including with electrical shocks, sometimes leading to the death of the victim. Lastly, those who re-appear are routinely prosecuted under vague charges and on the basis of statements they signed under torture while they were in secret detention.

“The use of enforced disappearance is not insignificant: it intends to terrify the population and curb all forms of resistance,” said Radidja Nemar, Regional Legal Officer for North Africa at Alkarama Foundation. “These appalling abuses show an extremely disturbing pattern of violations committed by the Egyptian state against its youth and merely constitute the tip of the iceberg of the brutal crackdown ongoing since the military takeover,” she concluded.

Alkarama therefore brought the following seven cases to the WGEID requesting the UN experts to urgently intervene with the Egyptian authorities and ask them to immediately release the students and at the very least to inform their parents of their fate and whereabouts and to ensure their physical and mental integrity:

Ahmed Seif Al Islam Mostafa Mostafa Mostafa Kamoun, a 21-year-old civil engineering student was arrested on 12 January 2017 by State Security agents in civilian clothes, in front of the Higher Institute for Engineering and Technology in Kafr Al Sheikh, where he was studying. They forced him to get into an unmarked car and took him to an unknown location. Following his disappearance, his relatives wrote to the General Public Prosecutor, the Minister of Interior, and to the Public Prosecutor of Kafr El-Sheikh, to no avail. As they were told that he was detained in Kafr El Sheikh’s State security services headquarters, they went there to inquire about him, but the officers denied his detention.

Zaid Mohamed Ahmed Ahmed Al Bana, a 16-year-old high school student, disappeared on 11 January 2017 following his arrest by agents from the State Security in plainclothes accompanied by Police officers in uniforms, in front of Al Borg High school, Al Burj Al Burlos, Kafr El Sheikh Governorate, where he was studying. Following his arrest, his mother filed several complaints with the General Public Prosecutor, to the Ministry of Interior as well as the General Prosecutor of Kafr El Sheikh, to no avail. She also visited the Al Burlos police station as well as the Sharm el Sheikh State Security headquarters, after being told by witnesses that her son was detained there. However, the authorities denied holding her son.

Ahmed Fawzy Ahmed Hafez Marzouq, a 22-year-old student at the Institute of Accounting and Information Systems in Alexandria, disappeared on 2 January 2017. That day, at 2am, State Security agents as well police officers stormed his parental house in Al Sabayah village, Al Brolos Station, As Sahel Al Qebli, Governorate of Kafr El Sheikh. The officers were carrying automatic weapons, pointing them to the victim as well as his brothers and sisters, terrifying the children present in the house. Following his arrest, his family immediately sent complaints to the Attorney General of Kafr El Sheikh, to the State Prosecution office, to the Ministry of Interior as well as to the National Council for Human Rights, to no avail.

Mohamad Jomaa Youssef Abdullah Zahra, a 20-year-old student in Media and Communication at Al Azhar University, disappeared on 26 December 2016 after State Security officers in civilian clothes stormed his house of in Mahdeyah, Markaz Hehya, Ash Sharqia Governorate. His family filed complaints with the Public Prosecutor and the District Attorney of As Sharqia Governorate, to no avail.

Ahmed Sameh Mohamed Ahmed Mansour, a 20-year-old student in electrical engineering, married and father of a little boy, disappeared after his arrest on 17 December 2016, close to Al Azhar University, Cairo, where he was studying, by State Security agents wearing civilian clothes. They forcibly took him in an unmarked car to an unknown location. Following his disappearance, the victim’s mother seized the Attorney General, the National Council for Human Rights, the Commission on Human Rights of the House of Representatives and the Presidency, to no avail. She also filed a declaration of disappearance with the police and went to the State Security services center in 6th of October City, after she was told by witnessed that he was taken there. However, they denied detaining her son.

Abdulrahman Mohamed Ibrahim Al Bih, a 21-year-old engineering student, disappeared on 15 November 2016 after his arrest by several State Security agents in plainclothes while he was shopping with friends in Nasr City, Cairo. The officers did not present any warrant nor explained the reasons for his arrest and took him to an unknown location. His father wrote to the General Prosecutor of Al Minufiyah Governorate as well as to the Ministry of Interior and President. However, he never received any response or information on his son’s fate and whereabouts.

Abdulrahman Fathy Abdulrahman Khalifa, a 22-year old student at the Faculty of Agriculture, Al Azhar University, disappeared after his abduction on 1 October 2016 by State Security agents in plainclothes and police officers in uniforms from his student room in Al Azhar’s student dorms in Nasr City’s 10th district. Following his disappearance, the victim’s mother sent complaints to the Ministry of Interior and the General Prosecutor of Cairo, but was denied any information on his fate and whereabouts.