Algeria: UN calls on authorities to end the use of violence against protesters 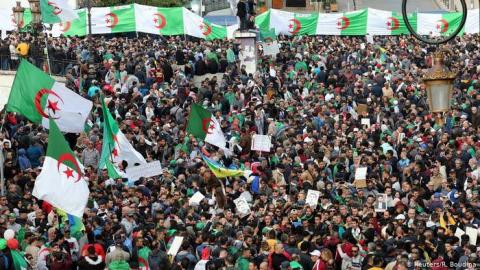 The Office of the UN High Commissioner for Human Rights has expressed its deep concern regarding the deterioration of the human rights situation in Algeria and the continued and increasing repression of members of the peaceful movement calling for democracy and the promotion of freedom. Alkarama has followed with great concern the deterioration of the human rights situation and the escalation of repression since the beginning of the movement in Algeria, and has shared the concern of families facing the return of arrests and enforced disappearances. Rupert Colville the Spokesman for the UN High Commissioner for Human Rights, said in a statement: "Algerian protests, which continued on the Internet because of the Covid-19 pandemic, have resumed in the streets in recent weeks." He added that the authorities are responding to these protests in the same repressive manner as in 2019 and 2020. He stressed that "the number of incidents across the country, in which the security forces have used unnecessary or excessive force and arbitrary arrests to suppress peaceful protesters is considerable." According to reliable reports, hundreds of people have been arrested since the protests resumed on February 13. The Spokesman said that these actions repeat what happened in 2019 and 2020, when at least 2,500 people were arrested and detained for their peaceful activities. He added that the criminal prosecutions witnessed in the past two years by activists, human rights defenders, students, journalists, bloggers and ordinary opposition citizens, continued in the first two months of this year. Colville said journalists have been arrested for covering the protests, and 16 independent media websites known for their critical reporting have also been blocked. He added that the vaguely worded provisions of the Algerian penal code are used to restrict freedom of expression and prosecute those expressing dissenting opinions. According to credible reports, approximately 1,000 people have been prosecuted for participating in the movement or posting messages critical of the government on social media.

Alkarama activity
The violation of the right to freedom of expression in Algeria remained one of Alkarama's main concerns. Individual complaints have been submitted regarding victims to the UN Special Procedures, and one example is the arrest and detention of political activist Karim Tabou on 11 September 2019, for whom Alkarama has requested the mechanisms of the Office of the High Commissioner for Human Rights asking for his immediate release and assurance of his safety by the General Staff.
Similarly for the activist Brahim Douadji, activist of the Mostaganem movement, arbitrarily arrested by the police on 11 October 2019, and the activist Fadel Breica, of Sahrawi origin and human rights defender is still in detention while the Opinion adopted by the Working Group on Arbitrary Detention on his case, after Alkarama had filed a complaint in his favor, confirms the arbitrary nature of his detention. Also in this context, Alkarama has raised, along with the UN High Commissioner for Human Rights and the UN General Secretary, the continued use of violence and arbitrary arrests of peaceful demonstrators, as these acts not only violate international and Algerian law, but also fall under the individual criminal responsibility of those responsible for them and those working under their control.
In April 2019, Alkarama wrote to the UN mechanisms for the protection and promotion of human rights, asking them to intervene urgently to protect the right to peaceful assembly of Algerian citizens involved in the popular movement. Alkarama has also called for the abolition of the articles of the Algerian penal code that criminalise freedom of expression and association in order to put an end to these practices. Following the amendments to the penal code with the adoption of Law No. 06-20 of 28 April 2020, Alkarama has asked several independent experts to carry out a joint study on the situation of fundamental rights and freedoms in Algeria, which continues to deteriorate since the beginning of the popular movement in February 2019. Violations of the rights to freedom of expression, peaceful assembly and association have become a systematic policy, as many political opponents, journalists and other peaceful activists have been tried and sentenced to prison terms or unjust punishments for actions described as "undermining the morals of the army" or "the unity of the national territory" by the judicial authorities, without these concepts being specified at all.

During the last review by the Human Rights Committee in 2018, the Committee had already expressed its concerns about the violation by the Algerian authorities of fundamental freedoms, in particular freedom of opinion and expression. In this regard, the UN experts expressed concern that articles 144 and 144 bis of the Penal Code "continue to criminalize or impose fines on activities related to the exercise of freedom of opinion and expression, such as defamation or insulting public officials or institutions."
According to reports, at least 23 people are currently detained for legitimately exercising their rights. Some face long prison sentences, while others remain in pre-trial detention. UN High Commissioner for Human Rights Spokesman Rupert Colville said that allegations of torture and ill-treatment in detention, including sexual violence, had also been received. The OHCHR called on the Algerian authorities to stop using violence against peaceful demonstrators, and to end arbitrary arrests and detentions. He urged the authorities to immediately and unconditionally release all those who have been arbitrarily arrested or detained because of their support for the Hirak movement, and to drop all charges against them. The Spokesman also called on the Algerian authorities to conduct prompt, impartial and effective investigations into all allegations of torture and ill-treatment, to hold those responsible to account and to ensure compensation for victims. The OHCHR also urged the authorities to repeal legal provisions and policies that are used to prosecute individuals for violating their rights to freedom of expression, opinion, and peaceful assembly.