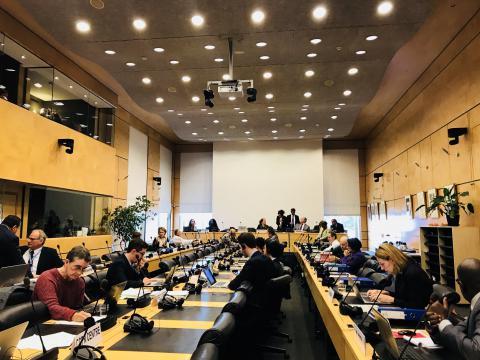 In its report, Alkarama raised numerous breaches of the provisions set out in the International Covenant on Civil and Political Rights (ICCPR) – which Algeria ratified in 1989 – including the impunity for perpetrators of serious human rights violations committed during the civil war, the government’s lack of co-operation with the HR Committee, and restrictions on fundamental freedoms. In its report, Alkarama offered a series of recommendations to improve the human rights situation in the country.

Enforced disappearances and the Charter for Peace and National Reconciliation

In its report, Alkarama recalled that Algeria has the fifth highest rate of cases pending before the UN Working Group on Enforced or Involuntary Disappearances (WGEID), and that the country visit requested by the WGEID in 2000 has been continually postponed by the government.

Alkarama also raised the issue of the problematic "Charter for Peace and National Reconciliation" of 2006, which the HR Committee had already called for Algeria to appeal since it violates several provisions of the ICCPR, including the right to an effective remedy.

Not only does the Charter create a climate of impunity by establishing a general amnesty for state agents who perpetrated severe violations of humanitarian and human rights law, but it also fails to provide legal recourse for victims’ families.

Although the HR Committee has adopted numerous decisions following individual complaints of serious violations of the ICCPR, the Algerian authorities have refused to take the necessary measures to implement these decisions to date. To the contrary, and in violation of their obligation to protect and support victims and witnesses of human rights violations, Algeria has resorted to measures of reprisals against such individuals.

Such is the case of Rafik Belamrania, who was convicted and imprisoned for “supporting terrorism” in 2017 after publishing a decision of the HR Committee on his Facebook page, recognising the responsibility of the Algerian armed forced in the extrajudicial execution of his father in 1995.

The rights of Sahrawi refugees in Algeria

Alkarama also recalled that Algeria has failed in its obligation to guarantee the rights contained in the ICCPR to all individuals throughout its territory, transferring certain powers – notably jurisdictional powers – to the Polisario Front in the Sahrawi refugee camps established in the Tindouf region.

This situation is concerning as it signifies that the Algerian authorities do not respect their obligation to prevent and remedy human rights violations committed against all individuals residing in the country. This is evidenced by the case of Ahmed Khalil Mahmoud Braih, a senior Polisario officer who was abducted by the Algerian security forces in Algiers in 2009.

The numerous attempts of his relatives to find out information on his fate and whereabouts from the Algerian authorities were in vain as their requests were sent back to the Polisario authorities due to their status as Sahrawi refugees. In 2016, Ahmed Khalil’s children were left with no other option than to raise his case with the HR Committee in the hope that the UN experts could shed light on the situation.

Fundamental rights still limited by law and in practice

The reforms introduced by the authorities in the context of the Arab Spring still fall well below the state’s obligations with regards to the protection of the rights to freedom of opinion and expression and of association and peaceful assembly.

Despite the lifting of the state of emergency in 2011, the ban on demonstrations remains in place in Algiers as a result of a decree enacted in 2001. This ban is regularly invoked to repress peaceful demonstrations in the capital, including those of the families of victims of enforced disappearances.

Furthermore, Law no. 12-05, which regulates the exercise of the right to information and freedom of the press, restricts these rights by imposing restrictions such as a requirement to respect state symbols and national history.

Moreover, the Penal Code includes provisions punishing press offences, which are then used as a basis for judicial proceedings against journalists and human rights defenders, such as in the case of Hassan Bouras.

Finally, the executive holds discretionary power to refuse the registration of associations on the pretext that they are contrary to “national values and principles, public order, good morals and provisions of the laws in force”. Human rights associations have their applications denied systematically without cause and their activities are prohibited in practice.