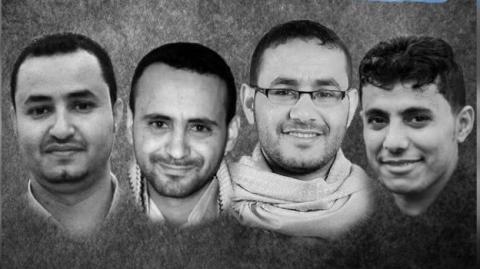 Alkarama has sent an urgent appeal to the Special Rapporteur on extrajudicial, summary or arbitrary executions, Agnès Callamard, regarding four journalists detained in Yemen, who are  risk of execution following a trial before the Houthis' Specialized Criminal Court, which lack any guarantee of minimum standards of justice.
The four journalists who are : Tawfiq Al-Mansouri, Harith Hamid, Akram Al-Waleedi, Abdul-Khaliq Omran, are still detained in in the prisons of the Houthi movement and face execution of the death sentence pronounced against them. They are currently spending their sixth consecutive year in prison, under constant psychological and physical torture. In mid-October 2020, five journalists held in Houthi (Ansar Allah) prisons were released in Sana'a, as part of a prisoner and kidnapper exchange agreement reached under the auspices of the United Nations and the International Committee of the Red Cross between the Houthi group, the recognized Yemeni government and Saudi Arabia. However, many journalists, including the four mentioned earlier, but also activists and other politicians are still in detention.
The released journalists revealed during a hearing that they had been subjected to torture and ill-treatment in Houthi prisons and that they had contracted chronic illnesses as a result and were still being treated in hospitals outside Yemen.

Alkarama's activities
Alkarama had been following the case of Yemeni journalists for years and corresponding with the UN Special Procedures about them. On 3 September 2015, Alkarama sent an urgent appeal to the UN Working Group on Arbitrary Detention regarding nine journalists, aged between of 23 and 31, who were abducted on 9 June 2015 from Dream Palace hotel in the capital, the by Houthi gunmen and taken to an unknown destination, before reappearing in various prisons. They revealed to their families that they had been subjected to terrible torture and ill-treatment and had been kidnapped because of their activities documenting human rights violations.
At the time, Alkarama expressed its fear that this abduction was revenge on them for documenting human rights violations committed by the Houthis, reminding on all parties to the conflict that enforced disappearance is a serious violation of international humanitarian and human rights law and that this practice cannot be justified under any situation or circumstance.
Houthi forces abducted these journalists and took them to Al-Ahmar police station in Al-Hasba and transferred them on July 3, 2015 to the anti-terrorism unit of the Criminal Investigation Department in Al-Adl Street of the Ministry of Interior under Houthi control, where they were held incommunicado before being transferred to an unknown destination. Later, they were incarcerated in the political security (intelligence) prison. After years of detention, enforced disappearance and torture, they were tried and four of them were sentenced to death.
The issue of the kidnapped Yemeni journalists has been widely reported, and the Yemeni Journalists Syndicate, a member of the International Federation of Journalists, and Yemeni civil society organizations have made many calls demanding the Houthis to release them. The families of the victims have also organized many demonstrations and filed complaints to the United Nations Special Envoy to Yemen, but to no avail.
The kidnapped journalists have repeatedly announced an open hunger strike in the Houthi-Saleh coalition's prisons in the capital, Sana'a, to protest the torture and attacks against them inside the prison, but the authorities have responded to their demands with even more repression, intimidation and ill-treatment.
Alkarama reiterates its call for the immediate release of the remaining detained journalists and all political activists abducted and arbitrarily detained by the various parties to the bloody conflict in Yemen.