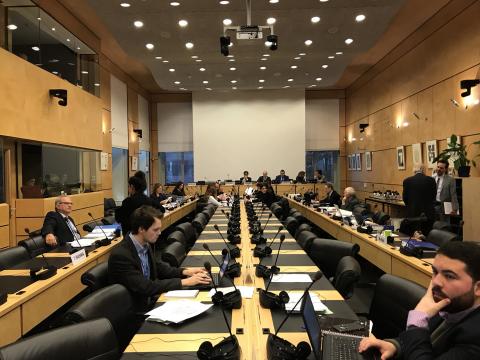 On April 5, 2018, the UN Human Rights Committee (HR Committee) published its Concluding Observations after reviewing Lebanon’s implementation of the provisions of the International Covenant on Civil and Political Rights (ICCPR) – ratified by Lebanon in 1972 – during an interactive dialogue in March 2018.

Ahead of the review – which took place in Geneva on March 15 and 22, 2018 – Alkarama submitted a shadow report highlighting its key concerns, and, together with Lebanese civil society organisations, subsequently briefed the Committee’s experts.

Despite acknowledging the state’s recent steps in reforming the legal system and the difficulties of managing the current Syrian refugee crisis, the HR Committee experts regretted the significant delay in Lebanon’s submission of its national report, stressing that it had been 20 years since the country’s last review.

The HR Committee raised concerns over a number of issues, including the practices of arbitrary detention and torture by security forces, inhuman conditions of detention, the lack of investigations into the fate of the disappeared, the issue of military courts’ jurisdiction and the lack of independence of the judiciary, as well as the violations of freedom of expression and the right to privacy.

Arbitrary detention and treatment of prisoners

In its Concluding Observations, the HR Committee raised concerns over the large number of individuals – including children – held in prolonged pre-trial detention. In a similar vein, the experts noted the frequent violations of fair trial guarantees such as the lack of access to a defence counsel – especially during preliminary investigations – and the recurrent breach of the 48-hour legal limit to bring the accused before a judge, particularly in cases of crimes related to state security. During the review, HR Committee expert Mauro Politi also highlighted the issue of arbitrary arrests and detention by government forces and armed groups.

Although the HR Committee praised the efforts made to improve the conditions of detention, such as the creation of a Prison’s Directorate to monitor places of detention, it stressed that prison overcrowding remains alarmingly high, and urged the state to repeal article 104 of Decree No. 14310 of 1949, which provides for disciplinary solitary confinement that can last up to 30 consecutive days.

Moreover, HR Committee expert Bamariam Koita urged the Lebanese authorities to ensure the humane treatment of individuals under the authorities’ custody regardless of the material resources available to the state, and regretted the lack of investigation into the 81 deaths in prison which occurred between 2012 and 2016.

The practice of torture and ill-treatment

The HR Committee shared the concerns of NGOs – including Alkarama – with regards to the 2017 Anti-Torture Law, and recommended that the state urgently amend the law to bring it into line with international standards.

In particular, the UN experts addressed the issues of the limitation of the definition of torture that leaves out acts of torture occurring during arrest and before preliminary investigations, the lack of criminalisation of ill-treatment, the statutes of limitations in the prosecution of acts of torture, the imposition of a range of penalties that do not reflect the gravity of the crime, and the lack of effective remedies and reparation for the victims.

Furthermore, the HR Committee regretted the lack of accountability for members of the security forces who perpetrate torture and ill-treatment against persons under their custody.

In its Concluding Observations, the Committee expressed serious concern over the lack of investigation into the fate of around 17,000 individuals who disappeared during the civil war, in clear violation of the families’ right to the truth. The Committee regretted the general climate of impunity surrounding enforced disappearances, stressing that, to date, no prosecution has been carried out for such acts.

The Committee further recommended that the State Party effectively criminalise enforced disappearances, and that it publish the reports from the past commissions of inquiry and amend amnesty laws in order to ensure that serious violations such as enforced disappearances do not fall under the scope of these laws.

Furthermore, the government was urged to establish an independent national body mandated to search for the disappeared as well as a national bank of the families’ DNA. The Committee also recommended that Lebanon complete the ratification process of the International Convention for the Protection of All Persons from Enforced Disappearance (ICPPED).

Referring to the Committee against Torture’s 2017 Concluding Observations, the UN experts enquired about the practice of secret detention, but the state delegation merely responded that “places of secret detention do not exist in Lebanon”.

Jurisdiction of military courts and independence of the judiciary

Echoing its previous Concluding Observations of 1997, the HR Committee urged Lebanon to repeal the jurisdiction of military courts to prosecute civilians, including minors. Moreover, the UN experts expressed concern over numerous violations of fundamental fair trial guarantees in military court proceedings such as the admission of confessions extracted under torture and the limited right to appeal.

While the Lebanese delegation affirmed during the review that the judiciary is independent and that fair trial rights are guaranteed, the HR Committee raised the fact that the draft laws aimed at reviewing the procedures of appointing judges to bring them into line with international standards were still being discussed in parliament. The Committee further expressed concern over the political pressure exercised over the judiciary and the lack of independence and impartiality of military courts’ judges.

Violations of the rights to freedom of expression and privacy

Recalling the numerous cases of individuals arrested for criticising public officials, the HR Committee urged Lebanon to decriminalise defamation, blasphemy, and insult and criticism of public officials, or at the very least, to apply the criminal code only to the most serious cases. It further highlighted how the Cybercrime Centre of the Internal Security Forces often interprets the concept of cybercrime in a broad manner which severely restricts freedom of expression, and further questioned the role of the General Directorate of Security in overseeing and censoring foreign publication and artistic works.

The UN experts enquired about the recent reports of mass surveillance of digital communications and interception of personal data, to which the Lebanese delegation stated that, according to domestic law, surveillance and interception did “not interfere with the citizens’ privacy” and that “any interception [was] made to protect state security”. The HR Committee also noted that Law No. 140, which requires prior judicial authorisation for intercepting private communications, was often circumvented through the direct authorisation of the prime minister.

The HR Committee’s experts requested that Lebanon provide them with information on the implementation of their most urgent recommendations – including those related to violence against women, refugees and asylum seekers, and migrant domestic workers – by April 6, 2020. Furthermore, Lebanon must submit its next periodic report by April 6, 2023, which must provide follow-up information on the implementation of the Committee’s recommendations.