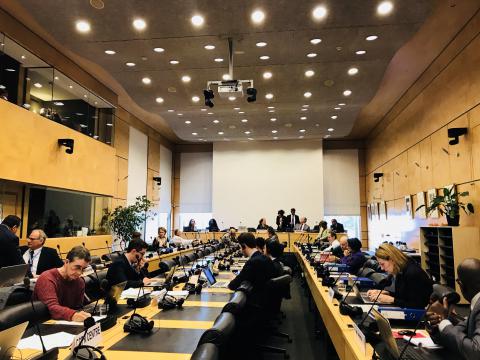 Ahead of Lebanon’s third periodic review before the UN Human Rights Committee (HR Committee) on March 15 and 16, 2018, Alkarama submitted its shadow report on February 12, evaluating the situation of civil and political rights in the country.

Among other issues, the report focused on the persistent practice of torture, violations of fair trial rights, the curtailment of the rights to privacy and freedom of expression, as well as the pressing need for the state to operationalise its National Human Rights Institution (NHRI).

During the session, the Committee's experts will assess the implementation of the International Covenant on Civil and Political Rights (ICCPR) – ratified by Lebanon in 1972 – on the basis of the State report as well as information provided by NGOs, including Alkarama.

“Torture is a pervasive practice”

“Torture in Lebanon is a pervasive practice that is routinely used by the armed forces and law enforcement agencies for the purpose of investigation, for securing confessions to be used in criminal proceedings and, in some cases, for punishing acts that the victim is believed to have committed.” This is how the United Nations Committee against Torture (CAT) described the practice of torture in Lebanon in 2014 following a confidential inquiry initiated by Alkarama under article 20 of the UN Convention against Torture (UNCAT).

In line with the CAT’s findings, Alkarama’s 2018 report argues that torture remains widely practised in the country. Cases documented indicate that when victims of torture or ill-treatment raise abusive behaviour by law enforcement officials or members of the military before a judge, allegations are seldom examined and perpetrators rarely interrogated. Though the Lebanese authorities do not deny the use of torture, they tend to respond to allegations by describing them as “isolated cases” that do not correspond with any kind of state policy.

In late 2017, the Lebanese authorities adopted the Law aimed at punishing torture and other cruel, inhuman or degrading treatment or punishment. However, as Alkarama outlines in its report, the law falls short of a number of key international standards with regards to the definition of torture itself, appropriate punishments, and statutes of limitations. Last but not least, the law leaves open the possibility for perpetrators to be referred to military courts, which lack independence and impartiality.

Lebanese legislation contains a number of legal safeguards and some basic principles to guarantee the right to a fair trial. For instance, a suspect has the right from the moment of arrest to contact a member of his family or a lawyer of his choosing, while any person arrested is required to be brought promptly – i.e. within 48 hours – before a judge. However, these standards are not systematically applied, especially in terrorism-related cases, exposing suspects to torture and arbitrary detention.

Alkarama notes that individuals suspected of terrorism are prone to be arbitrarily arrested and detained for lengthy periods of time without being brought before a judicial authority and without any contact with the outside world, i.e put in a situation of incommunicado detention. During this time, they are tortured to extract confessions which are commonly relied upon and even used as the sole source of evidence in proceedings.

Crimes of terrorism or undermining national security fall under the jurisdiction of the Military Court and the Judicial Council, two exceptional courts that do not abide by fair trials standards. Indeed, the military courts are composed of a majority of military judges who are not required to have a law degree. They are appointed by the Ministry of Defence and remain directly subordinated to the same ministry. As for the Judicial Council, its members are appointed by decree of the Council of Ministers and its decisions cannot be appealed.

Alkarama’s report recalled the arbitrary detention of 72 persons arrested following the 2007 clashes in the Palestinian camp of Nahr Al Bared. On the basis of confessions extracted under torture, they were sentenced by the Judicial Council to prison sentences ranging from 2 to 15 years – with the exception of one person who was sentenced to death – which could not be appealed.

Although the Working Group on Arbitrary Detention (WGAD) issued an Opinion characterising their detention as arbitrary and calling for their immediate release, the UN decision has not been implemented by the authorities. The so-called “Nahr Al Bared cases” also illustrate the issue of long periods of pre-trial detention which can be renewed indefinitely under terrorism charges.

An erosion of the rights to privacy and freedom of expression

Recently, the rights to privacy and to freedom of expression have suffered from growing interference from the authorities. On January 18, 2018, the US-based NGO Electronic Frontier Foundation (EFF) and mobile security company Lookout released a report establishing a link between a highly advanced spying platform “Dark Caracal” – which was stealing extensive amounts of data from mobiles and desktops – and the Lebanese General Security Directorate in Beirut. Those targeted included activists, journalists, lawyers, and educational institutions.

At the same time, the activities of Lebanon’s Cyber Crime Bureau – a body placed under the jurisdiction of the judicial police, and operating outside any legal framework – have contributed to the curtailment of basic freedoms associated with online activities. The Bureau has been granted extensive powers to summon any person for investigation at its offices, including individuals facing prosecution for posts on Twitter, Facebook or on a blog.

For example, on July 10, 2017, freelance journalist Fidaa Itani was summoned by the Internal Security Forces’ Cybercrime Bureau after publishing a blog post criticising Foreign Minister Gebran Bassil, the Lebanese army and President Michel Aoun over their treatment of Syrian refugees, in particular the cases of four Syrian refugees who died in military custody following a military raid on refugee camps in Arsal.

In light of the country’s precarious human rights situation, Alkarama’s report recommends that Lebanon operationalise its National Human Rights Institution (NHRI) and ensure it is able to effectively carry out its mandate in full compliance with the Paris Principles. The Lebanese Parliament approved a law establishing an NHRI – including a national preventive mechanism against torture – on October 19, 2016, but the institute is not yet operational, its members are yet to be appointed by the government, and no budget has been allocated.