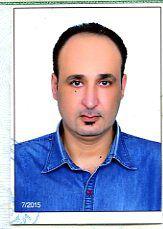 Faced with the threat of extradition from Morocco to Egypt, Egyptian journalist Hany Khater announced his intention to go on hunger strike from March 14, 2018 to protest against his recent transfer to a high security institution. Khater, who has been detained in Morocco since February 2016 on the basis of an international arrest warrant issued by Egypt, is concerned that this transfer may further worsen his state of health, which has been aggravated during his more than two years of detention.

Khater is the co-founder of an independent union of journalists which is not recognised by the Egyptian authorities. In 2010, while working as a  journalist between Egypt and Morocco, he founded a media company as well as newspaper “Les Nouvelles du Maghreb”. In February 2016, Khater was arrested by police officers in Casablanca on the basis of an international arrest warrant issued by Egypt on February 12.

Detained and awaiting extradition for more than two years, Khater is currently being held in the high security section of Tiflet II Prison, which is usually reserved for prisoners serving long-term sentences. Since early November 2017, he has been repeatedly requesting that the prison administration allow him see a doctor, but it was not until February 28, 2018 that he was finally taken to hospital. Khater was prescribed urgent radiological checks and analyses which, to date, have not been performed.

"We believe that the aggravation of Hany Khater's state of health is directly related to the inertia shown by the prison authorities," said Rachid Mesli, Legal Director at Alkarama. "The refusal to provide adequate medical care constitutes a form of cruel, inhuman and degrading treatment, contravening article 16 of the Convention against Torture (UNCAT), which Morocco ratified in 1993."

Alkarama sent an urgent appeal to the United Nations Committee Against Torture (CAT) on November 14, 2016, demanding urgent measures to cancel the extradition procedure from Morocco to Egypt, where there are substantial grounds for believing that Khater would be in danger of being subjected to torture.

The UN regularly denounces the widespread use of arbitrary detention and torture as well as systematic violations of the right to a fair trial in Egypt. Journalists, activists, trade unionists and human rights defenders have been targeted by the authorities, and convicted following unfair trials in which confessions obtained under torture are admitted as the sole source of evidence.

There is no doubt that Hany Khater, as a trade unionist and journalist critical of the authorities, would face the same treatment should he to be handed over to the Egyptian authorities. Morocco would thus violate its obligations under article 3 UNCAT not to transfer persons under its jurisdiction to a place where they would be at risk of torture and other forms of ill-treatment.

Pending a decision by the CAT on the legality of the extradition proceedings, and in light of Khater’s ongoing hunger strike, Alkarama calls on the Kingdom of Morocco to release Hany Khater and, in any event, to guarantee him appropriate conditions of detention and medical care.