Algeria: Torture and Arbitrary Detention of Member of the Algerian League for the Defence of Human Rights for over 8 Months 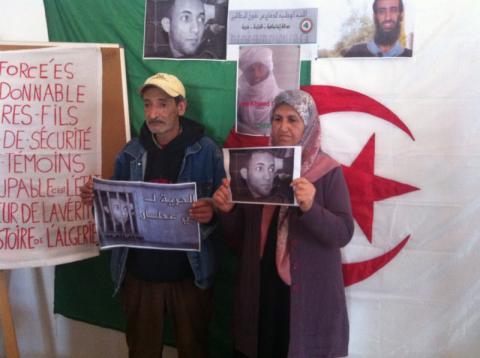 On 9 October 2015, Alkarama submitted to the Special Rapporteur on the promotion and protection of human rights and fundamental freedoms while countering terrorism (SR TERROR), a communication calling him to intervene in the case of Ali Attar, arbitrarily detained since his arrest without judicial warrant in February 2015. For the first 12 days of his arrest, Ali was a victim of torture and ill-treatment while detained incommunicado. He is now being held at the prison of El Harrache, pending a trial whose date has not yet been set.

Aged 28 and residing in Algiers, Ali is an activist of the Algerian League for the Defence of Human Rights (LADDH) and an activist in the National Coordination for the Defence of the Rights of the Unemployed (CNDDC). Arrested by plainclothes policemen on 9 February 2015, the human rights defender was taken to the anti-terrorist cell of Bouchaoui, where he was held incommunicado for 12 days. During his detention, he was the victim of acts of physical and psychological torture by agents of the Department of Intelligence and Security (DRS) before being transferred to the operational Command Post Centre of Chateauneuf in Algiers.

Referred to the Prosecutor of the Algiers Tribunal on 21 February 2015, Ali was accused of "incitement to commit terrorist acts," a very serious charge which he never stopped denying before the investigating judge. In order to denounce his arbitrary detention, the young Attar began a hunger strike on 26 September 2015. Concerned about the deterioration of his health condition and unable to obtain justice in their own country, his relatives mandated Alkarama to send a communication on Ali's case to the UN Special Procedures on Human Rights.

His case is not unlike the recent arrest of another Member of the LADDH, the independent journalist Hassan Bouras, on 2 October 2015 in El Bayadh Waliya. Since the disputed presidential elections in 2014, members of the LADDH and CNDDC are the subjects of a strong campaign of intimidation orchestrated by the Algerian authorities. In 2015, numerous arrests of members of these two civil society organisations have been conducted.

On behalf of the Attar family, Ali's sister recalls that "he suffered a shock after being tortured mentally and physically with the aim to make him confess to acts he did not commit" and calls for his immediate release.

Concerned about Ali's prolonged detention in serious violation of Article 19 of the International Covenant on Civil and Political Rights (ICCPR), binding upon Algeria by virtue of its ratification in September 1989, Alkarama called on the Special Rapporteur on the promotion and protection of human rights and fundamental freedoms while countering terrorism (SR TERROR) to remind the Algerian authorities of their obligations to respect fundamental rights and freedoms in the fight against terrorism. Alkarama also calls on Algeria to urgently open a direct, impartial and independent investigation into allegations of torture made by Ali Attar.