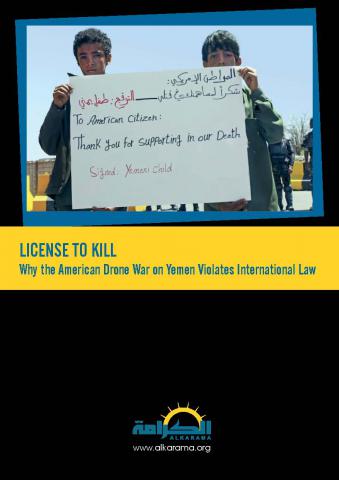 The use of drones by the USA to commit targeted assassinations in Yemen should be considered, and qualified, as extrajudicial executions.

Geneva/Sanaa - Since the first strike in November 2002, the United States has carried out between 134 and 234 military operations in Yemen in its alleged 'war on terror'. These include strikes by aircraft and drones as well as missiles launched from warships located in the Gulf of Aden. Estimates of the number of people killed as a result of these 'targeted killings' range from 1000 to 2000. Although neither the Yemeni nor the American authorities have put forward official statistics on the number of casualties, Dennis Kucinich, a representative of the U.S. Congress, states that the number of high-level targets killed as a percentage of total casualties is estimated at about 2 percent - the vast majority of the victims being civilians.

"Yemen – just like Pakistan – has become a testing ground for revolutionary new methods of warfare, not only technically, but also politically and legally.", said Karim Sayad, Alkarama Regional Legal Officer for the Gulf.

The 94-page report "License to kill; why the American Drone War in Yemen violates international law" released today presents the results of Alkarama's field research and analysis on the US strategy in its 'war on terror' with respect to international, examines the reactions of the US and Yemeni officials and civil society groups in light of the serious violations committed.

This report is the result of several field investigations conducted throughout Yemen in 2012 and 2013 by Mohamed Al-Ahmady, director of Alkarama's office in Yemen in collaboration with Yemeni human rights NGO Hood. The delegation went to several sites of drone attacks in order to gather witness accounts and victim testimonies on these strikes as well as information from the families and lawyers. Interviews were also held with government officials and members of civil society.

Yemen's current president Abd al-Rab Mansour al-Hadi, came to power in February 2012 following a mass revolution by the Yemeni population. As a national dialogue encompassing various Yemeni political groups is underway since March 2013, al-Hadi has reinforced Yemen's ties with the United States, placing large regions of Yemen territory at the disposal of the US and encouraging its military intervention in the country, including by attributing the responsibility of attacks to the United States directly. This has increased tensions within the population which does not support American air strikes.

Under the cover of counter-terrorism measures, the American administration has involved itself directly in an multi-dimensional internal conflict taking place between the central Yemeni authorities and multiple opposition movements including armed groups of Jihadist tendency – namely al-Qaeda and Ansar al-Sharia – but also the south separatist movement and different tribes that contest the central government's authority.

The United States has never declared war on Yemen, and instead refers to the AUMF (Authorization to Use Military Force) resolution of 14 September 2001 to justify their intervention in Yemen, despite the fact that the Yemeni government is considered an ally and does not represent a threat to the US. The AUMF sets out measures to combat those with ties of any kind to the attacks of 11 September 2001. This has been interpreted to include all those that are considered to be "associated forces" of al-Qaeda, although this phrase does not appear in the resolution itself. This term in fact first appeared in President Obama's speeches and official White House texts and is used to legitimize combat against groups whose ties with al-Qaeda are not always clearly established.

"Regardless of the context in which the American intervention in Yemen takes place, the American military and C.I.A continue to use drones, other types of military aircraft as well as warships to commit targeted assassinations that should be considered, and qualified, as extrajudicial executions", said Karim Sayad. "Whether they hit civilians or/and alleged al-Qaeda combatants and associates, US targeted killings' policy in Yemen constitutes a blatant violation of international human rights law."

In reality, the forces implicated also target unidentified combatants who do not play a leadership role, who are anonymous and do not have charges held against them. Civilians also suffer due to the human and technical errors that American political and military leaders accept as necessary collateral damage in the pursuit of their aims.

Recommendations to the American and Yemeni governments; to the United Nations' Human Rights Council:

To the American government:

To the Yemeni government: