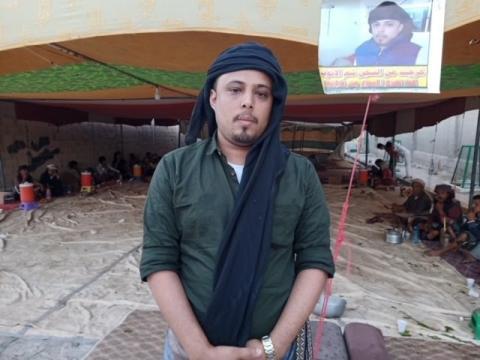 A former Yemeni detainee of the Emirati secret prisons in Yemen has revealed that he was subjected to psychological and physical torture at the hands of Emirati investigators, while being held in a secret prison in the Balhaf oil complex. This complex is managed by the French company Total, in the Yemeni province of Shabwa.
Former detainee Salem Al-Rubaizi has given a chilling account of the torture he endured in a secret prison in the UAE-occupied Balhaf facility. He was arrested by the UAE-backed Shabwani Elite on June 10, 2019, and transferred to numerous detention centers, where he was subjected to electric shocks and severe beatings to force him to tell a fabricated story to convict him of communicating with a foreign country, before being released in early April 2021.
Alkarama was in contact with the family of detainee al-Rubaizi during his detention. Since the beginning of the armed conflict in Yemen, it has monitored the deteriorating human rights situation in the country, given the continuation of the war, the absence of the rule of law and the prevalence of a climate of impunity. In recent years, Alkarama has submitted dozens of individual complaints to the UN Human Rights Special Procedures, including violations committed by the different parties to the conflict in the country, including cases of detention, enforced disappearance and torture. Parallel reports were also presented during the UPR, highlighting the human rights situation in the country.
In early 2021, a report issued by the Security Council Sanctions Committee indicated that all parties to the conflict in Yemen continue to commit serious violations of international humanitarian and human rights law, including indiscriminate attacks against civilians, enforced disappearances, and torture.
Numerous human rights reports have documented widespread violations by UAE forces or local armed formations affiliated with them in many parts of Yemen, some of which amount to war crimes and crimes against humanity, including torture and enforced disappearances in secret detention centers that are not subject to judicial authorities. The UAE used to deny this, despite the testimony of many surviving victims of these terrible secret prisons.
Recently, three non-governmental organizations confirmed that a gas extraction site in the Balhaf area of Shabwa governorate in southern Yemen, part of which is used by the French group Total, included a secret prison used by Emirati soldiers in 2017 and 2018. This site contains a liquefaction plant and a terminal for the export of liquefied natural gas.
The organizations Arms Observatory, Smovas and Friends of the Earth said in the report: "According to available sources and testimonies, the site has housed since 2016 the militia of the "Shabwa Elite Forces" under the supervision of the UAE and added that "the testimonies related facts of deprivation of care, torture committed by Emirati soldiers." Also, "Those imprisoned there are usually accused of belonging to al-Qaeda in the Arabian Peninsula," often on the basis of "unfounded suspicions or personal vengeance. "
In an investigation published by the French newspaper "Le Monde", the place of arrest is on a military base that the Emiratis installed in mid-2017 on part of the gas field, controlled at the request of the Yemeni government.

Alkarama stresses, once again, that according to international law, there is criminal responsibility for these violations, and that they can give rise to prosecution of militia leaders who have been involved in crimes against the right to life, physical and moral integrity, freedom, or any practice that violates human dignity.