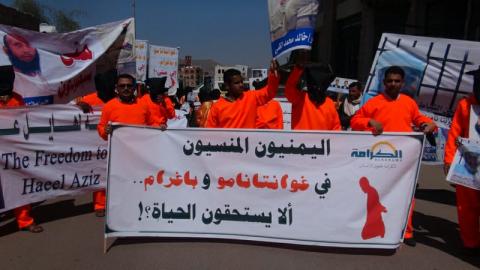 United Nations human rights experts condemned the United Arab Emirates for the arbitrary detention and ill-treatment of Yemeni detainees returning from Guantanamo Bay, expressing concern about the risk of forced return to their country, Yemen, in light of the continuing armed conflict and humanitarian crisis.
For years, the issue of Guantanamo detainees has remained Alkarama's main concern through various support and advocacy mechanisms, but it has also organized or participated in numerous events and field activities alongside the families of detainees and NGOs, in support of the relatives of the victims of this notorious detention center and in memory of the latter.
The UN experts said in a press release: "It is disturbing that instead of being enrolled in a rehabilitation program or being released, these men have been continuously placed in arbitrary detention in an unknown location. Especially now that they are at risk of being forcibly returned to their country, Yemen, in light of the continuing armed conflict and humanitarian crisis". The eighteen detainees were also forced to sign documents agreeing to be returned to Yemen, failing which they would continue to be detained in the UAE indefinitely.
The UN experts called on the UAE to halt plans to forcibly return eighteen Yemeni citizens who were previously detained at Guantanamo Bay, and said that their forced return to Yemen was life-threatening and violated human rights and international humanitarian law.
According to the UN experts' statement, these former Guantanamo detainees were transferred to the United Arab Emirates between November 2015 and January 2017. They were reportedly assured that for humanitarian reasons they would spend between 6 and 12 months in a residential rehabilitation program before being released to allow them to live in Emirati society and be reunited with their families.
The experts expressed serious concern about the secrecy surrounding the conditions and method of implementation of the detainee transfer program agreed between the United Arab Emirates and the United States of America. The experts stated that the return process was taking place without any form of judicial guarantees or individual study and risk assessment, which blatantly violates the total prohibition of the principle of non-refoulement in accordance with international humanitarian and human rights law.
The experts stressed that no country has the right to expel, return or remove an individual from its lands if there are serious reasons to believe that the person will be exposed to danger or torture in the country of destination.
The experts said: "We are concerned that the detainees, after years of detention at Guantanamo Bay without charge or trial, are facing long periods of detention without charge or trial in the UAE with restrictions on contact with their families and without any legal representation, while they are being mistreated. "
Last July, experts expressed similar concerns about the Emirati government. In their statement, the experts called on the Emirati authorities to announce the conditions of the prisoner transfer program, immediately release all former Guantanamo detainees in the Emirates and allow them to be reunited with their families.