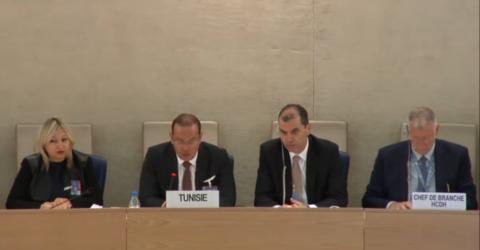 On 5 May 2017, the Working Group on the Universal Periodic Review (UPR), established by the Human Rights Council (HRC), adopted a draft report containing the recommendations made by United Nations Member States to Tunisia during its review which took place on 2 May 2017. Member States commanded the efforts of Tunisia to complete its democratic transition and to align its legal system with relevant international human rights instruments. They however expressed concern over the persistence of torture, death penalty as well as undue restrictions to the rights to freedom of expression, association and peaceful assembly, echoing Alkarama’s concerns raised in its September 2016 report to the HRC. Among other issues raised by Members States were violence against women and the non-incrimination of marital rape, education and children’s rights.

Practice of torture, excessive use of force and death penalty

Despite the ratification of the Convention against Torture and Other Cruel, Inhuman or Degrading Treatment or Punishment (UNCAT), torture remains of concern in Tunisia. As emphasised in Alkarama’s report, torture is practiced especially but not exclusively in the context of the fight against terrorism, to force victims to sign confessions, which will then be used against them. During the UPR, several Member States, including Switzerland, Togo, Ukraine, Austria, Czechia, France, Germany, the Netherlands, Norway and Ghana, recommended Tunisia to take the necessary measures to prevent torture and ill-treatment by ensuring that allegations are systematically investigated and perpetrators held accountable. They further recommended Tunisia to bring the definition of torture in line with the UNCAT and to strengthen the independence of the national mechanism for the prevention of torture.

Furthermore, several Member States – including Canada and the US – expressed concern about the excessive use of force and other security forces abuses against individuals suspected of involvement in terrorist activities, recommending Tunisia to investigate them in a prompt, effective and independent manner. They further encouraged Tunisia to create a law or guidelines to end the use of excessive force and to ensure proper training for police and security forces.

Lastly, although Tunisia is observing a de facto moratorium on the death penalty since 1991, the 2014 Constitution did not abolish it. In fact, and as underlined in Alkarama’s report, the 2015 Anti-Terrorism law imposes the capital punishment on anyone convicted for terrorism; as a result, several death sentences were pronounced since its enactment despite allegations of torture raised by defendants. During the review, UN Member States, including Italy, Rwanda and Ireland, encouraged Tunisia to maintain its de facto moratorium on the use of the death penalty

Infringements to the rights to freedom of expression, association and peaceful assembly

As Alkarama noted in its report, several laws adopted since the 2011 Revolution and enshrining the rights to freedom of association, peaceful assembly, expression and press, have still not been effectively implemented. During the UPR, numerous Member States – including Czechia, Lebanon, Romania, Spain and Finland – voiced Alkarama’s concern underlining the lack of effective implementation of these legislations and recommended Tunisia to accelerate their application. In addition, Member States encouraged Tunisia to ensure a conducive environment for human rights defenders and the civil society to carry out their legitimate activities without fear or undue hindrance. They further recommended Tunisia to carry out prompt investigations of all threats targeting human rights defenders and bring those responsible to justice.

Lack of efficiency and independence of national human rights mechanisms

While conducting its democratic transition, Tunisia established national human rights mechanisms such as a National Preventive Mechanism against Torture and a National Human Rights Institution. In its report, Alkarama emphasized their lack of independence and efficiency calling on UN Member States to recommend Tunisia to strengthen these mechanisms and ensure that they are adequately resourced, swiftly operational and fully independent. During the UPR, several Member States, including Pakistan, Chile, Luxembourg, Ghana, UK and Italy, made such recommendations and further encouraged Tunisia to develop comprehensive national human rights policies, to adopt human rights capacity building and enhance training programs for law enforcement officials.

In addition, numerous UN Member States, among which Qatar, Italy, UK, Kenya, Romania and Honduras, encouraged Tunisia to take effective measures to align its legal system with its new constitution as well as the relevant international human rights instruments and to complete the establishment of the Constitutional Court.

Overall, Tunisia received 248 recommendations from UN member States, which the country must consider before September 2017 and inform the Human Rights Council of whether these are accepted or rejected. The State should then implement the accepted recommendations until its fourth UPR cycle in 2021, in order to improve the human rights situation on the ground.