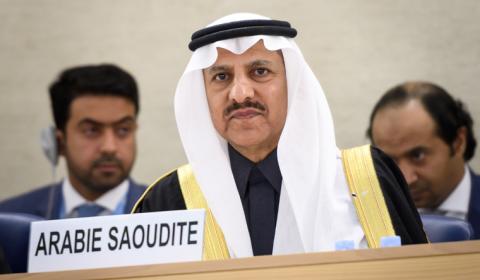 On March 14, 2019, the UN Human Rights Council (HRC) formally adopted the Saudi Arabia’s outcome report in the framework of its third Universal Periodic Review (UPR), which was held on November 5, 2018.

The UPR, which is held every four to five years, is a peer-review mechanism during which UN Member States assess each other’s human rights records and make recommendations based on the principles enshrined in the Universal Declaration of Human Rights (UDHR). Following this process, the state under review evaluates recommendations and provides feedback as to which ones it will “support” (i.e. implement) and which it will “note” (i.e. reject).

In total, Saudi Arabia received 258 recommendations on a variety of issues, including the death penalty, the practice of torture, violations in the context of counter-terrorism, the right to freedom of expression, the male guardianship system and the murder of Jamal Khashoggi.

Torture & violations in the context of counter-terrorism

The Saudi authorities only partially accepted recommendations made by Estonia and Montenegro to repeal laws that allow stoning, amputation, and flogging of children and to abolish all forms of corporal punishment. Surprisingly, the country accepted two recommendations to adopt further steps to prevent torture and degrading treatment in prisons and to implement legal reforms to prevent secret and indefinite detention. It also accepted a number of recommendations made with regards to counter-terrorism, such as Norway’s recommendation to ensure that the country’s counter-terrorism legislation complies with international human rights norms, including by revising the broad definition of terrorism and no longer making it applicable to non-violent expression. Statements made by the State party in the context of the adoption of the UPR outcome about how Saudi Arabia’s counter-terrorism framework was already in compliance with international standards and how secret detention did not exist in the country, however, call into question the authorities’ true commitment to the implementation of these recommendations. Moreover, Alkarama remains concerned that Saudi Arabia rejected a recommendation by Canada to remove provisions in the 2017 counter-terrorism law that call for incommunicado detention.

Saudi Arabia received over 30 recommendations on the protection of civil liberties, such as freedom of opinion, freedom of peaceful assembly and human rights activism. Affirming that freedom of expression and association is guaranteed under the Saudi legal framework and that peaceful activism is not criminalised, the Saudi authorities accepted the majority of the recommendations already considering them as implemented. Alkarama is highly alarmed by such statements as they do not reflect the reality on the ground. Since the accession of Mohammed bin Salman, we witnessed a heightened crackdown on freedom of expression, which commenced in September 2017 when the authorities initiated a campaign of mass arrests targeting individuals from all sectors of society, including human rights defenders, businessmen, scholars and members of the royal family.  Moreover, the authorities rejected a recommendation by Belgium to amend the Law on Associations and Foundations to bring it in full conformity with international law and standards. They also rejected two recommendations made by Iceland and Germany that made reference to the release of female human rights defenders.

Alkarama witnessed a similar pattern in regard to women’s rights and the abolition if the male guardianship system. The Saudi authorities accepted all recommendations made to guarantee women equal legal standing and abolish the male guardianship system. Yet they only accepted these recommendations after affirming that the country’s laws take into account the principle of equality and to protect women from male domination.

The murder of Jamal Khashoggi

Several recommendations were issued on the killing of Saudi journalist Jamal Khashoggi, some of which were accepted. Yet,  Iceland’s recommendation to invite a team of international experts to participate in the investigation of the murder of Jamal Khashoggi as requested by the United Nations High Commissioner for Human Rights, and provide full support to this team, including full access to evidence and witnesses was rejected. Furthermore, the Saudi authorities have not allowed the UN Special Rapporteur on extrajudicial, summary or arbitrary executions, Agnes Callamard, who is leading the international investigations into the killing of Khashoggi access to its territory.

Overall, Saudi Arabia received 258 recommendations from 96 UN Member States, 186 of which it accepted and 76 that it rejected. The Saudi authorities will now have four years to implement the accepted recommendations. While Alkarama will closely monitor the implementation of these recommendations, it is also the responsibility of the UN member states to ensure that the commitments made by Saudi Arabia during this UPR cycle are more than just empty promises, but are in fact realised to improve the human rights situation on the ground.