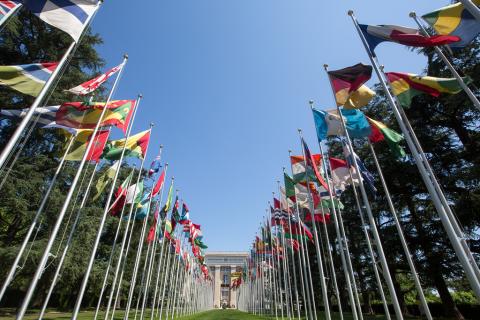 (Geneva, July 20, 2018) – On June 20, 2018, Agnes Callamard, United Nations Special Rapporteur on extrajudicial, summary or arbitrary executions, published a report following her official visit to Iraq that took place between November 14 and 23, 2017. Prior to the country visit, Alkarama provided the Special Rapporteur with information on serious violations of the right to life in the country, such as the use of the death penalty, executions, and the systematic practice of enforced disappearance.

In her report, Callamard put forward a series of recommendations, including for all parties to the conflict to be held accountable for the violations they committed, and for all security forces to be effectively controlled by the government or disarmed and disbanded. This would include the Popular Mobilization Forces (PMF), an umbrella organisation of militias that supported the Iraqi armed forces in their fight against the Islamic State of Iraq and the Levant (ISIL).

In the context of the armed conflict between the Iraqi armed forces and affiliated militias against ISIL and other armed groups, the Special Rapporteur highlighted the mass killings of civilians committed by ISIL, as well as the numerous enforced disappearances followed by executions based on sentences issued by ISIL courts.

Callamard then highlighted the violations committed by the other parties to the conflict, such as the “interceptions, enforced disappearances and killings” committed by the government and its affiliated forces as reprisals against Sunni civilians – including displaced Sunnis fleeing from Mosul – as well as the high estimates of civilians killed during airstrikes carried out by Coalition Forces, especially in the context of the battle for Mosul.

Furthermore, Callamard considered the numerous violations of the right to life committed in the Kurdistan region, such as the arbitrary arrests, enforced disappearances and retaliatory attacks by Kurdish security forces and affiliated militias against Sunni individuals fleeing Mosul or living in recaptured territories, as well as the attacks against several journalists and media workers.

Today, Iraq has the fourth highest rate of executions of the death penalty worldwide. Executions are mostly carried out following unfair trials under the Anti-Terrorism Law, which broadly defines terrorism and prescribes mandatory capital punishment for a wide range of acts, some of which do not meet the threshold of the “most serious crimes” provided by international law. The Special Rapporteur called upon the Iraqi government to establish an official moratorium on the death penalty and, in the meantime, to review its domestic legislation to bring it into compliance with international standards. She further recommended that the Kurdistan regional government adopt a formal moratorium and outlaw capital punishment in its domestic legislation.

Furthermore, Callamard reiterated the state’s obligation to document and investigate all violations and to prosecute perpetrators from all parties to the conflict, while shedding doubt on the government’s declared efforts to hold its own forces accountable. She further urged the government to allow the Investigative Team established in 2017 by UN Security Council resolution 2379 to investigate violations committed by all parties to the conflict. Additionally, the UN expert advised the Iraqi authorities to establish complementary and victim-centred transitional justice strategy and truth-seeking process to document the violations committed during the armed conflict.

Concerning the government’s response to ISIL’s violations, the Special Rapporteur called upon the authorities to repeal the Anti-Terrorism Law (No. 13) of 2005 to prosecute ISIL members – due to its broad definition of terrorism, and the lack of fair trial guarantees – and to halt the accelerated trials and mass executions conducted under this law. She further urged the Iraqi and Kurdistan governments to amend their domestic legislation to cover international crimes, in order to provide domestic courts with jurisdiction over the crimes committed by ISIL fighters.

In Iraq, enforced disappearance has been a widespread practice for decades, and it recently peaked in the framework of the armed conflict against ISIL. The country currently has the highest number of missing persons in the world, with estimates ranging from 250,000 to one million missing individuals.

In this context, the Special Rapporteur recalled the enforced disappearances carried out by the Iraqi forces and their affiliated militias against Sunni individuals, and highlighted the importance of investigating the fate and whereabouts of all the disappeared. She further exhorted the authorities to issue certificates of absence to all families of the disappeared, including the relatives of suspected members of ISIL, and she provided a series of recommendations concerning the management of mass graves, particularly with regards to the location, excavation and identification of the disappeared.