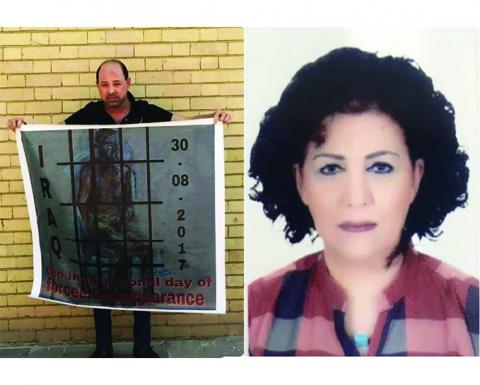 (Geneva, September 28, 2018) – On September 18, 2018, Alkarama submitted the cases of Imad Al Tamimi and Israa Al Dujaili to the United Nations Special Rapporteur on the situation of human rights defenders (SRHRD), requesting that the independent expert call upon the Iraqi authorities to immediately cease all acts of reprisals against them.

On July 14, 2018, Imad Al Tamimi, a 35-year-old labourer who volunteers for the human rights NGO Al Wissam Humanitarian Assembly, was abducted near Baghdad’s Medical City by members of the Special Weapons and Tactics Unit (SWAT), who did not show a warrant nor did they inform him of any reason for his arrest. He was forced into a black pick-up truck before being transferred to an unknown location.

While detained in a secret facility run by the SWAT, he was subjected to acts of torture for the first two weeks of his detention. Methods used included severe beatings all over the victim’s body and repeated electric shocks on his limbs.

His interrogators were interested in his involvement with Al Wissam Humanitarian Assembly, and asked questions about his relationship with Salam Al Hashimi, the founder of the NGO, as well as about “Jurf Sakhar”, a secret detention facility run by the Hezbollah brigade. The militia, affiliated with the Popular Mobilisation Units (PMU), has been accused of using this facility to detain incommunicado and torture individuals suspected of having ties to the Islamic State (IS) and internally displaced persons (IDPs) fleeing territories controlled by IS.

Under duress, he was forced to sign a document stating that he would no longer participate in any event related to enforced disappearance in Iraq, and that if he failed to do so, he would be re-arrested along with his brothers. He continued to be denied all access to the outside world, without the possibility to contact his family or lawyer until September 7, 2018, when he was finally released.

As for Israa Al Dujaili, she was subjected to threats and intimidation on August 27, 2018 after she went to a print shop to collect posters advertising events organised by Al Wissam Humanitarian Assembly on the occasion of the International Day of the Victims of Enforced Disappearances on August 30, 2018.

After leaving the shop, a group of men stopped her and interrogated her about the posters she was carrying. She was verbally assaulted and subjected to threats in relation to her participation in these events. Fearing further reprisals, she found refuge in the Kurdish autonomous region.

Al Dujaili believes that her assailants acted on behalf of the Iraqi National Intelligence Service (INIS), as the Ministry of Interior had issued a circular ordering all copy shops to inform it of any printed publication deemed critical of the authorities in the context of the ongoing social unrest in Basra.

Throughout February and March 2018, Iraqi human rights defender Faisal Al Tamimi – Imad’s cousin – was subjected to threats and attacks in retaliation for speaking out against the practice of enforced disappearances and for calling on Iraq to join the International Criminal Court (ICC).

Concerned over the growing number of cases of reprisals against human rights defenders working on the issue of enforced disappearance in Iraq, Alkarama requested that the SRHRD call on the Iraqi authorities to ensure Imad Al Tamimi and Israa Al Dujaili are allowed to carry out their work in a safe and enabling environment without fear of threats, acts of intimidation or reprisals of any kind. In addition, the competent authorities must open an investigation into the acts of torture committed against Al Tamimi in retaliation for his activism, and ensure the perpetrators are held accountable.