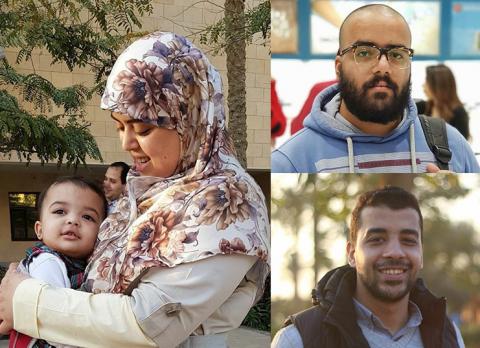 The family was last heard from at 6 p.m. on March 24, when Abdullah called his sister to tell her that they were about to board a train to Asyut in order to visit Fatma’s mother. Omar, who had been visiting his sister in Cairo, was also travelling to Asyut, where he resides. At 11 p.m., as the family had not reached Asyut and their relatives had received no news from them, Abdullah’s sister tried to call them again, but their phones were all switched off.

On March 25, Abdullah’s sister received a call from Abdullah and Fatma’s neighbours, informing her that several officers from the National Security Agency (NSA) had raided Abdullah and Fatma’s apartment. Since the NSA usually searches the homes of individuals they have under their custody, Fatma, Abdullah, Omar and Alyah’s relatives expressed serious concern about their safety.

Following their disappearance, on March 25, their relatives promptly contacted the General Attorney, the Ministry of Interior, and Asyut’s Prosecutor, but they are yet to receive a response.

On March 27, Alkarama submitted the cases of Fatma, Abdullah, Omar and Alyah to the United Nations Working Group on Enforced or Involuntary Disappearances (WGEID), asking the independent experts to call upon the Egyptian authorities to release them immediately or, at the very least, to put them under the protection of the law and to disclose their fate and whereabouts.

“The practice of enforced disappearances in Egypt has seen an alarming increase in recent years, with thousands of cases being reported across the country since 2013. Fatma, Abdullah, Omar and Alyah’s abduction shows how widespread the practice of enforced disappearance has become in Egypt and its sheer cruelty,” said Khadidja Nemar, Alkarama’s Regional Legal Officer for the Maghreb and Nile regions. “The Egyptian authorities must be reminded that such a practice may amount to a crime against humanity under international criminal law, giving rise to individual criminal responsibility of perpetrators and their superiors.”