EGYPT: The UN Working Group on Arbitrary Detention seized of the cases of Abdelrahman ELSAYAR and Hegazy HAMZA 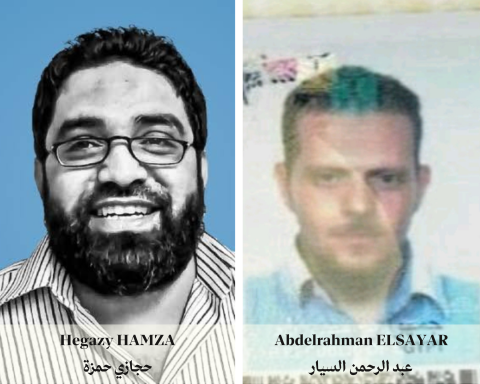 On 22 June 2022, Alkarama submitted the case of Abdelrahman Ali Mohammed Ali ELSAYAR and Hossam Ali Mohamed Hegazy HAMZA to the UN Working Group on Arbitrary Detention, both of whom were arbitrarily arrested by the Egyptian security forces and then sentenced to long prison terms following unfair trials.

The case of Abdelrahman ELSAYAR

Abdelrahman Ali Mohammed Ali ELSAYAR, an engineering student, was arrested on 20 September 2016 at around noon in Aswan by security forces who accused him of wanting to leave the country illegally before being forcibly taken away in an unmarked van.

Following his arrest, his family approached various Egyptian authorities, including the public prosecutor and police stations, who provided no information about his fate or whereabouts. Three months later, a lawyer who knew the family personally told them that he had seen Elsayar at the military court in Cairo.

When he was finally brought before the investigating judge, he was accused of having “a lot of money” (about $2,000 which was confiscated) and of being affiliated with the Muslim Brotherhood.

On 9 March 2020, after nearly four years in pre-trial detention, he was sentenced to 10 years' imprisonment by the Cairo military court on charges of participating in the planning and attempted assassination of the Egyptian deputy general. No material evidence was presented by the prosecution, which relied on a confession extracted under torture from another co-defendant. The judgment became final after the appeal was rejected on 13 October 2021.

Although Mr. Elsayar denied any involvement in the acts attributed to him during his trial, the judge in charge of his case replied that even if he knew he was innocent, he should be sentenced because it was a “political” case. He is currently being held in Tora prison.

Hossam Ali Mohamed Hegazy HAMZA was arrested by security forces in a hospital in Cairo where he had been transferred by demonstrators on 14 August 2013 after being injured by bullets from security forces in Rabaa al-Adawiya Square in Cairo. On that day, he was among the demonstrators taking part in sit-ins across the country against the deposition of the elected president, Mr. Mohamed Morsi, in a military coup organized by his defense minister, Abdel Fattah Al Sisi.

Thousands of protesters camped out in Rabaa al-Adawiya Square for six weeks until they were violently dispersed by Egyptian security forces who killed around 1,000 people and injured 4,000 others.

After his arrest, Hamza was placed in a state of enforced disappearance for two weeks and was finally brought, without a lawyer, before the State Security Prosecutor's Office. Charged with several “crimes”, including “joining a group whose aim is to call for the disruption of the provisions of the constitution and laws” and “preventing the institutions of the state from functioning”, he was remanded in custody for over three years.

On 8 September 2018, after an unfair trial, he was sentenced to 15 years in prison in the “Rabaa Square dispersal” case. Confirmed on appeal on 14 June 2021, the judgment against him became final.

During his detention and despite his condition, Hamza has not received any medical care and has instead been beaten and subjected to ill-treatment and torture. He is currently being held in Tora prison.

Mandated by the families of the two victims, Alkarama therefore addressed the UN Working Group on Arbitrary Detention in a communication dated 22 June 2022.

The Working Group referred to by Alkarama

In its communication, Alkarama stressed that the deprivation of liberty of the two victims is unfounded in law and therefore arbitrary. Indeed, both arrest and detention of the two victims do not meet any of the criteria of legality set out in the International Covenant on Civil and Political Rights ratified by Egypt in 1982.

Firstly, the two individuals were arrested without being notified a judicial warrant nor the reasons for their arrest. Elsayar and Hamza were then held incommunicado and were intentionally removed by the authorities from the protection of the law. Thus, the most basic guarantees of detention were violated from the beginning of their arrest until the day they were brought before a competent judicial authority.

Alkarama also indicated that Hamza's deprivation of liberty constitutes a violation of his right to freedom of assembly and association as enshrined in the Covenant. As a recall, Hamza was arrested during a raid on the hospital to which he had been transferred by the demonstrators after being injured by bullets from the security forces in Rabaa Square.

During the bloody events of 14 August 2013, Egyptian security forces killed, with impunity, nearly a thousand Egyptians who were peacefully participating in the protests.

Alkarama representatives were present at the scene and had compiled an exhaustive list of the victims intentionally killed that day by the security forces.

Furthermore, both victims were detained for a long period of time and neither was brought before an authorized judicial authority within a reasonable time nor given the opportunity to challenge the legality of their detention.

During the proceedings, Elsayar and Hamza were tried in mass trials in violation of their right to a fair trial. The Working Group had already expressed serious doubts about the fairness of such trials and stressed that they do not allow for the respect of individual criminal responsibility. The UN experts had stated that “collective criminal responsibility of a large number of defendants in mass trials also amounts to a violation of their right to the presumption of innocence, guaranteed by Article 14 (2) of the Covenant”.

Furthermore, none of the victims were given the time and means to prepare their defense. Both were deprived of their right to be assisted by a lawyer from the beginning of their arrest and throughout the trial. They were kept in pre-trial detention for a long period of time in violation of the accused's right to be tried without undue delay.

Finally, Alkarama stated that the prosecution and treatment of the two victims is a direct result of their political opinions, which also makes their deprivation of liberty arbitrary.

Indeed, while Elsayar was accused of being affiliated with the Muslim Brotherhood, Hamza was arrested while demonstrating against the military coup. Both were subjected to discriminatory treatment because of their political opposition or criticism of the military coup, or because of their real or supposed membership of the Muslim Brotherhood, which was a legal political party.

The numerous cases submitted by Alkarama to the UN Special Procedures following the Rabaa Square massacres have shown that the banning and listing of the Muslim Brotherhood political party as a terrorist organization by the military authorities following the coup was used to systematically deny the fundamental rights of those considered to be members or sympathizers of this group. It is also worth noting that the magistrates in charge of judging the mass trials have publicly declared their support for the military authorities and denied the existence of human rights violations by the military regime, which have been well documented.

For all these reasons, Alkarama invited the UN Working Group to recognize the arbitrary nature of the deprivation of liberty of the two victims and to call on the State party to release them in accordance with its international commitments.