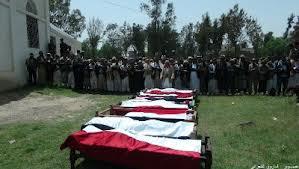 As US President Barack Obama prepares to give a long awaited speech tomorrow regarding his administration's counter-terrorism policies, Alkarama and the Yemeni based NGO "HOOD" today submitted to two UN experts detailed information from investigations the organizations carried out into the US strike, an attempted 'targeted assassination', in Radaa on 2 September 2012 resulting in the death of twelve civilians.

Obama should reconsider the use of targeted assassinations as part of his administration counter-terrorism policies given the growing evidence that these strikes, be they drone, missile or aircraft strikes, are leading to numerous civilian deaths. Further, Alkarama calls on the US and Yemeni authorities to ensure they open an independent and effective inquiry into these extrajudicial killings and hold the perpetrators accountable.

On 24 January 2013, UN Special Rapporteur on Counter Terrorism, Ben Emmerson, launched an inquiry "into the civilian impact, and human rights implications of the use drones and other forms of targeted killing for the purpose of counter-terrorism and counter-insurgency". The investigation will focus on 25 cases studies from Pakistan, Yemen, Somalia, Afghanistan and the OPT "with a view to determining whether there is a plausible allegation of unlawful killing". The 10-member panel will present its conclusions at next session of the UN General Assembly in the Fall of 2013. In this framework, Alkarama and HOOD will be submitting detailed information on ten US drone attacks in Yemen to UN Special Rapporteur Ben Emmerson. The case of the September 2012 attack on Radaa is the first.

On 2 September 2012, a Toyota Land Cruiser transporting 14 Yemeni nationals between the cities of Radaa and Dhamar was destroyed by two missiles. Eleven people, including two children and one woman, were killed immediately. A twelfth passed away several months later as a result of his injuries.

Two days later, Alkarama's Legal Coordinator in Yemen, Mohamed Al Ahmady, met with the three survivors of the attack at Sanaa Public Hospital despite attempts by the Yemeni security services to not allow any visits. The Director of the hospital stated that the 3 survivors arrived at the hospital with second degree burns and that the bodies of the 11 other victims were only identified by the families because of their personal belongings.

Nasser Mabkhout Al Sabuly, the 45 year-old driver of the pickup who survived the attack, recalls: "It was approximately 4 pm. We were all returning home from Al Radaa market where we usually sell our products. We are farmers. While I was driving, I saw two aircrafts flying over the car and one of them began to fly lower and lower..." He told Alkarama that he was not expecting any attack as "we were only civilians in the car". "As the plane came closer," he continued "a first rocket was fired at the front of the pick-up, turning it upside down and starting a fire".

"A deluge of fire and bodies burning" is all Mr Al Sabuly can remember of the first strike before he fainted. Bystanders report that within seconds, a second missile struck, presumably to make sure that all the passengers in the vehicle were killed.

Another survivor of the attack deplored: "The plane was so low. Undoubtedly, the pilot must have seen us. See that we were not armed. See that there was a woman and two children amongst us."

Dawla Al-Sabuli, an 8 year-old girl, was hugging her mother when she died. At the Al Thawra hospital morgue in Dhamar, where the bodies were being stored, she was found with her arms open. Thirteen year-old Mabrouk Al Daqari also died during the strike. His father said about him: "Everybody loves Mabrouk. Untill now, we cannot bear to tell his grand-father that Mabrouk is dead."

The Yemeni authorities at first announced that the victims of the attack were all Al Qaeda militants and that a Yemeni plane had carried out the attack. They said that the apparent target was Abderrauf Al Dhahad, an alleged senior Al Qaeda leader living in Radaa, who was thought to be in a car travelling on the same road. However, Mr Al Sabuly, the driver of the car, told Alkarama that no other car was close to his pick up at the moment of the attack. Furthermore, Military observers raised serious doubts regarding the technological ability of Yemeni military aircraft to carry out such an attack.

Alkarama and HOOD attended the burial of the victims in Dhamar. The inhumations were carried out in complete violation of normal Yemeni legal proceedings following such deaths: No autopsy was carried out on the bodies and no death certificates establishing the cause of death were issued by local authorities.

Yemeni officials later admitted that an American aircraft had fired the two missiles that hit the car and caused the death of civilians. In December 2012, US officials in Washington finally acknowledged their responsibility in the attack saying it was a Defense Department aircraft that hit the truck, without further comment.

"We are not terrorists. We are not Al Qaeda. We have nothing to hide. We are just poor people struggling to make ends meet..." said Jamal Al Sabuly who lost a family members in the attack.

Yemeni authorities eventually acknowledged that the victims were civilians, and were not involved in any armed activities nor linked to any illegal group involved in criminal activities. Indeed, on 20 September 2012, a delegation sent by the Yemeni authorities reportedly met with the victims to provide them with a financial compensation. The two survivors received 5000 dollars which was not even sufficient to cover the medical expenses and flights to receive treatment in Egypt.

Warfare in the skies, summary executions on the ground

2012 has been the deadliest year since the first US airstrike in Yemen in November 2002. According to Yemeni Journalist Ali Al Shabani, 109 air attacks were carried out in 2012 alone by US forces in cooperation with the Yemeni authorities in 9 different provinces resulting in the death of 490 people, including 390 civilians. This surge in attacks is clearly linked to the US - Yemen offensive of the spring 2012 against local armed groups, including Ansar Al Shariah, which had taken control of parts of Abyan in 2011. Following the offensive, the groups fled Abyan's major cities to take refuge in smaller towns and provinces. During 2011 and 2012, local inhabitants of Al Baydha reported and complained several times that the region was being surveyed by Unmanned Arial Vehicles (commonly referred to as drones), presumably aiming at gathering information to conduct "targeted killings" of high profile members of armed groups.

In the 2012 Radaa attack, the target was not even present and 12 unarmed civilians who were not involved in any criminal or terrorist activities were victims of extrajudicial executions, in violation of both domestic legislation in both the USA and Yemen, and international human rights law.

"The State guarantees its citizens individual freedom, and protects their dignity and security."

Mohammed Muqbal, who lost three members of his family in the attack, added: "We ask the Yemeni government to protect its citizens' rights. They have to stop those US attacks. As we say here, the house can only be repaired by its landlord".

The dozens of attacks carried out by the US government using drones, missiles and other aircraft on Yemeni soil since 2002 which have been recognized by the authorities of both countries confirms that the Yemeni government is aware of these killings. As the perpetrator of the killings is a foreign State, namely the United States of America, the government of Yemen has also failed to guarantee the security of its citizens in allowing a foreign State to perpetrate killings on the territory under its jurisdiction, consciously breaching article 48(a) of its constitution which states: "The State guarantees its citizens individual freedom, and protects their dignity and security."

"Everyone is presumed innocent until proven guilty"

The victims of the Radaa attack were not subjected to any legal proceedings in which accusations of any crimes committed could have been presented to them, and against which they could have defended themselves. Their targeting and execution hence constitutes a violation of article 47 of Yemen's Constitution, which guarantees that "everyone is presumed innocent until proven guilty".

The Fifth Amendment of the U.S. constitution further states that "No person (...) [shall] be deprived of life, liberty, or property, without due process of law" The Radaa strike was carried out without any "due process of law", in clear contradiction with this principle. The killing of these twelve individuals was led and acknowledged by U.S. forces. No legal procedure justifying the reasons for the targeting of the car has been provided to the public or to the families of the victims.

"No one shall be arbitrarily deprived of his life."

Yemen and the United States are both parties to the International Covenant on Civil and Political Rights (ICCPR) which states at its article 6 that "No one shall be arbitrarily deprived of his life."

The Yemeni government acknowledged that all the victims were civilians, meaning it is impossible for the Yemeni and the American governments to invoke any reservation or exceptional circumstances to the implementation of the right to life guaranteed by this treaty.

The Radaa attack is one of the few cases where both sides acknowledged their responsibility for the attack. Yet, no independent or effective inquiry on these attacks in order to clarify the chain of command and the procedure that allowed for the targeting, tracking and killing of these civilians. No one is being held accountable for this attack and the dozens carried out since. Finally, no appropriate reparations have been provided to the families of the victims.

Alkarama and HOOD have been documenting a series of air attacks carried out by US military planes or drones between 2009 and 2013 throughout Yemen in the name of the 'war on terror'. The context in which these attacks take place go beyond the apparent objective of the United States, that is eliminate terrorists who are deemed a threat to their interests. It is of major concern that the identity of the targets is rarely established, their involvement into criminal or terrorist acts has not yet been proven and no charge has been brought against them.

Our organizations today submitted detailed information regarding the 12 individuals killed in this attack to UN Special Rapporteur on Extrajudicial Executions Christof Heyns and UN Special Rapporteur on Human Rights and Counter Terrorism, asking that they intervene with the US and Yemeni authorities to ensure independent, impartial and effective investigations are undertaken into these deaths and that those responsible be prosecuted. Furthermore, Alkarama and Hood calls on both countries to reconsider their policy of targeted killings in the country.

Details of the 12 victims killed in Radaa attack, 2 September 2012