United States: UN Experts Call for Punishment of those Responsible for "Guantanamo" Violations 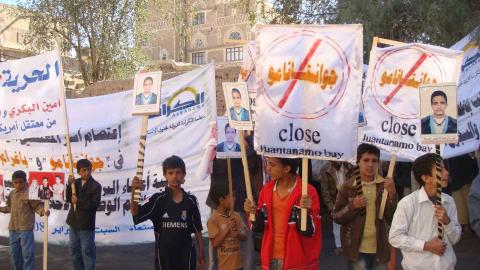 United Nations human rights experts called on Washington to ensure that those responsible for the violations suffered by the notorious "Guantanamo" detainees be punished, and that the victims be compensated. They also welcomed US President Joe Biden's announcement of his intention to close the detention facility.
In a statement, the experts stressed the need for - those who were subject to forced disappearance, arbitrary detention, torture, and those deprived of their right to a fair trial - to receive "adequate treatment and compensation", calling for ensuring that "independent and impartial investigations and trials are conducted into all credible allegations" related to these violations.
The experts urged the United States to "prove that it is not only prepared to close the prison facilities, but rather to ensure that these practices are not resorted to again, and that crimes committed there do not remain unpunished."

Alkarama activity
For years, the issue of "Guantanamo" detainees has remained at the top of the list of Alkarama's concerns. Through various support and defense mechanisms, Alkarama has organized or participated in many actions and field activities alongside the detainees' families and non-governmental organizations, in order to highlight the suffering of the victims and their families. Alkarama also launched support campaigns to support the detainees who have been subjected to violations and deprived of their rights under international humanitarian law.
Alkarama continues to monitor with concern the conditions of groups of detainees returning from Guantánamo who face extremely poor humanitarian conditions, such as the 18 Yemeni detainees hosted by the UAE which has unfortunately not fulfilled its obligations towards them.

The closure of the detention center
The White House announced earlier this month that President Biden was seeking to close the military prison that was established in Cuba after the attacks of September 11, 2001 to house detainees of "the US war on terror."
Two UN groups welcomed the announcement - the working groups on enforced disappearances and on arbitrary detentions in addition to five independent human rights experts-. The experts stressed that the Biden administration must also address the violations suffered by the forty remaining detainees inside the prison, including the torture practices They added that: "As we approach the twentieth anniversary of the events of September 11, we urge a transparent and comprehensive review that focuses on accountability for the work of the prison and its legacy."
They noted that many of the detainees still inside Guantanamo have become old and weak after years of "constant deprivation of liberty and the associated physical and psychological torture."
They stressed, "the necessity to reject the policies and practices that led to the establishment of this prison and its military committees, in order to prevent the recurrence of such practices that clearly contradict international law."