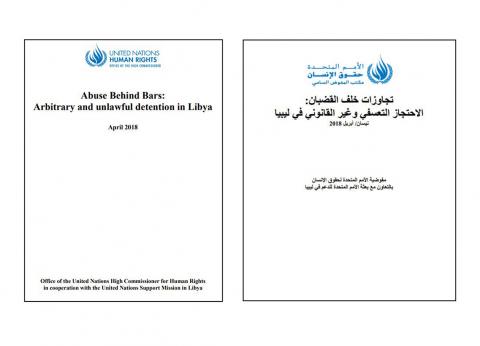 On April 10, 2018, the Office of the United Nations High Commissioner for Human Rights (OHCHR) released a comprehensive report in cooperation with the United Nations Support Mission in Libya (UNSMIL) addressing the various abuses committed by all armed groups currently operating in Libya since the signing of the Libyan Political Agreement (LPA) on December 17, 2015.

The UN report found that armed groups throughout the country, some of them directly or indirectly affiliated with one of the competing political entities, “hold thousands of men, women and children in prolonged arbitrary and unlawful detention, and subject them to torture and other human rights violations and abuses. Victims have little or no recourse to judicial remedy or reparations, while members of armed groups enjoy total impunity.”

The OHCHR and UNSMIL estimate that, as of October 2017, around 6,500 people have been held in official prisons overseen by the Judicial Police of the Ministry of Justice, while thousands more are held in a multitude of other facilities nominally under the control of the Ministry of Interior or Ministry of Defence, or run directly by armed groups. These facilities, such as the Mitiga airbase under the control of the RADA Special Deterrence Forces militia, are notorious for endemic torture and other human rights violations.

The report further found that armed groups – including those affiliated to the UN-backed GNA – routinely deny detainees any contact with the outside world in the initial period of their detention, and sometimes refuse to confirm to family members the whereabouts of their loved ones. The cases documented by Alkarama show that detainees can be held incommunicado for prolonged periods of time under circumstances which amount to an enforced disappearance.

This is the case of 56-year-old housewife Khayriah*, who was summoned to the headquarters of the Central Security Force (CSF) in Tripoli on November 9, 2016, arrested without a warrant, and subsequently disappeared. Her family enquired about her fate and whereabouts at the CSF’s headquarters, where they were told that she had been handed over to the RADA Special Deterrence Forces.

On April 6, 2018, Alkarama and the Libyan Organization for Truth and Justice requested that the United Nations Working Group on Enforced or Involuntary Disappearances (WGEID) promptly intervene with the Libyan authorities to urge them to immediately inform Khayriah’s family of her fate and whereabouts and to release her immediately. On April 12, Alkarama was informed that Khayriah had been released the day before. Despite the misleading information given to her family, it transpired that Khayriah had been held by the CSF all along.

In recent years, Alkarama has documented several other cases of enforced disappearances following a similar pattern, including Mohamed Al Mgwab and Hussein Ali, who were abducted by forces under the authority of the GNA in May 2017 and January 2018, respectively, and who remain disappeared to date.

In light of the staggering number of arbitrary detentions in Libya, the OHCHR and the UNSMIL called on the Government of National Accord to formulate a strategy and plan of action to end arbitrary and unlawful detention in consultation with relevant national and international stakeholders.

*Surname has been removed to protect the victim’s identity.