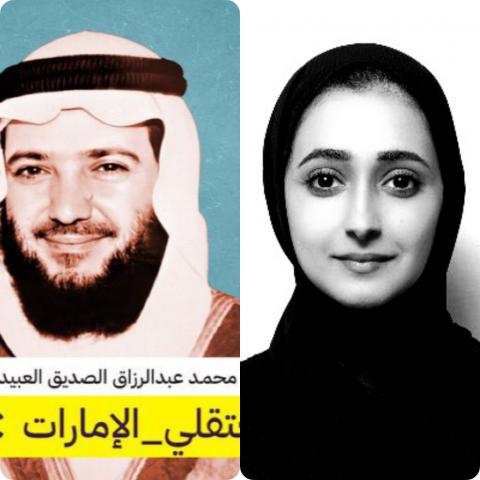 Alkarama shares the grief of the family of Emirati prisoner of conscience Mohammed Abdul Razzaq Al-Siddiq and the human rights family in the death of human rights activist Alaa Al-Siddiq, who died following a traffic accident in Oxford, UK.
Alaa Al-Siddiq was the executive director of the AL-QAST Foundation for Human Rights, which works with prisoners of conscience in the Gulf. She was subjected to harassment, persecution and suffering, and was forced to leave her homeland after her citizenship as well as those of all her family members were taken away. Al-Siddiq has made tireless efforts to publicise the suffering of her father, detained Emirati political opponent Muhammad Abdul Razzaq Al-Siddiq, one of the members of the group (Emirates 94) whose cause Alkarama has worked to defend and publicise.

In recent years, Alaa Al-Siddiq has been active in the defence of her father, who has been detained in UAE prisons since 2012. She has participated in several events, in which she highlighted human rights violations in the UAE, which was the cause of her exile from her country.
In June last year, Al-Siddiq appealed to all human rights organisations to end her father's suffering. In her appeal she said: "I haven't heard his voice for eight years! My father is a Sharia teacher who did not create a secret organisation, and my father is innocent. And she spoke of some of the suffering she and her family have endured as a result of the repression her father, Muhammad Abdul Razzaq Al-Siddiq, was subjected to, stripped of citizenship along with three of his children, was also subjected to torture, enforced disappearance and was sentenced to 10 years in prison in an unfair trial.
Al-Siddiq is one of 94 imprisoned political opponents whose case Alkarama has been following for years. A coalition of seven international human rights organisations have denounced the serious violations committed by the Emirati authorities against them and have demanded an investigation into the allegations of torture and denial of a fair trial.
The 94 defendants, eight of whom are being tried in absentia, face prison sentences of up to 15 years for allegedly violating Article 180 of the Penal Code, which prohibits the creation, organisation or management of an organisation aimed at overthrowing the government. Those arrested include prominent human rights lawyers Muhammad al-Roken and Muhammad al-Mansoori, judges, teachers and student leaders. They also include Judge Muhammad Saeed Al-Abdouli and Dr Hadef Al-Owais, a lawyer and university professor.
Following the complaints submitted by Alkarama, the United Nations Working Group on Arbitrary Detention, at its 68th session held from 31 to 22 November 2013, issued its resolution no. (60/2013), regarding dozens of prisoners of conscience in the UAE, a group known as (UAE 94 Group). In this resolution the working group confirms the arbitrariness of the detainees, and considers their detention as a serious violation of the country's obligations under international human rights law.
Many of the detainees belong to an Emirati organisation called the Society for Reform and Social Guidance, a non-violent movement that has been involved in peaceful political dialogue in the UAE for several years and calls for greater adherence to Islamic teachings.
It should be noted that the United Arab Emirates not only violates civil and political rights, but also attempts to criminalise these rights or their exercise under several pretexts, and seeks to generalise its repressive human rights policy to other Arab countries, in clear violation of international human rights law.