UAE: 7 years since the unfair trial of the UAE94 Group 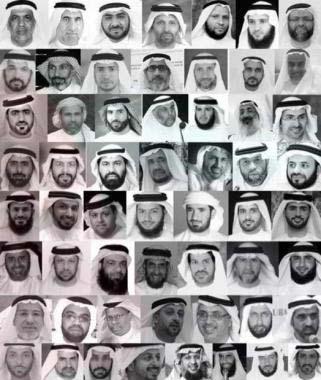 Today marks 7 years since the unfair trial of 94 human rights defenders, political opponents and activists in the United Arab Emirates. The trials, according to UN experts and NGOs clearly lacked the minimum fair trial standards.
Alkarama has worked alongside other international organizations over the past years on the issue of the UAE94 Group. The Group comprised  judges, lawyers, political activists, university professors and students who were arrested by the Emirati authorities during the year 2012 as they demanded political reforms in the country. Most of them were taken to secret detention centers and subjected to torture and ill-treatment. They were subsequently sentenced to heavy prison sentences in unfair trials.
Rachid Mesli, Alkarama’s Legal Director, says: “The UAE authorities have made fabricated charges against the detainees, including for example links to a ‘secret organization’ or attempting to ‘overthrow the regime’, but the truth is that these charges were just a aiming at silencing voices that exercised their right to express their opinion and formulated demands for democratic reforms concomitantly with the widespread popular protests of the Arab Spring revolutions.”

In its Opinion No. 60/2013, on September 9, 2013, the UN Working Group on Arbitrary Detention (WGAD) concluded that the “lack of legal justification for the arrest and detention of the above-mentioned persons, together with the vagueness of the charges subsequently laid against them, renders the deprivation of liberty in the present case arbitrary”.
The WGAD considered the violations of the right to freedom of opinion and expression and the right to a fair trial in this case to be serious and stressed that that depriving the UAE94 persons of their freedom is an arbitrary measure, contrary to articles 8,9,10,11,19,20 of the Universal Declaration of Human Rights.
The WGAD added that the appropriate remedy is to release the sentenced individuals and provide them with appropriate compensation, and suggested that allegations of torture be referred to the UN Special Rapporteur on Torture and Other Cruel, Inhuman or Degrading Treatment or Punishment. It also called on the UAE authorities to ratify the International Covenant on Civil and Political Rights.