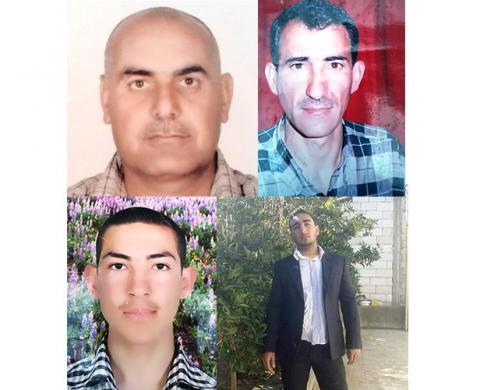 (Geneva, July 5, 2018) – Alkarama and Human Rights Guardians have submitted five cases of enforced disappearances in Syria to the United Nations Working Group on Enforced or Involuntary Disappearances (WGEID), requesting that the UN experts promptly intervene with the Syrian authorities to ensure the individuals’ immediate release.

All five men were abducted by government forces between 2011 and 2013, adding to the thousands of cases of enforced disappearances documented across the country since the beginning of the armed conflict in 2011. All five victims were arrested without being shown a warrant and without being given any reason for their arrests.

Museaf Al Humaidi, a farmer by trade, was disappeared on November 6, 2011 after being abducted from the town of Kafr Zita while on his way to work.

He was arrested by the Syrian Army at the entrance of the town and taken to a house where he was  questioned for three consecutive hours by a high-ranking officer about whether he had been in possession of a weapon in the previous days. Despite denying this allegation, Museaf was forced into a military truck and taken to an unknown location.

After enquiring about his whereabouts, members of Museaf’s family were informally told that he was being held in a detention facility in Damascus. They were unable to obtain any further information.

On July 12, 2012, farmer Mohamad Al Sattam was arrested by members of the Air Force Intelligence in the northern neighbourhood of Taramsah village in the Hama governorate.

Mohamad was at home with his wife and four children when members of the Air Force Intelligence entered and violently beat him with the back of their rifles. The security forces then dragged him out of the house and into the main street of Taramsah, forced him to board a military truck, and took him to an unknown location.

On the same day, university student Firas Al Mustapha was visiting the northern neighbourhood of Taramsah village to check on his sister and brother-in-law, as an artillery shell had recently fallen near their home.

After reaching the village’s main street, he was stopped by members of the Air Force Intelligence and interrogated about his relation to militias in the area. Despite denying having any links with the groups, Firas was forced into a military truck and taken to an unknown location.

Both Mohamad’s and Firas’ disappearances occurred within the context of violent clashes between Syrian armed forces and the Free Syrian Army, commonly known as the “battle of Tremseh”.

Mohamad’s and Firas’ families enquired about their whereabouts at the Air Force Intelligence branch in Damascus on February 5, 2013 and September 15, 2012, respectively, but to no avail.

On that day, Louay had gone to Al Baath University to submit a paper. At the time, a pro-government demonstration was taking place just outside the university campus. Two members of the Political Security Service entered the university, collected students’ identity cards and forced them to join the demonstrations. After checking his identity and university cards, Louay was arrested by members of the Political Security Service at around 1 p.m. and taken to an unknown location.

Louay’s family made several enquiries – including at various security offices and the military airport – in the hope that they would be able to locate him, but to no avail.

On May 17, 2013, labourer Mustapha Al Serjawi was travelling to Lebanon by bus. At the entrance of Al Qutayfah city in the Rif Dimashq governorate, the bus was stopped by members of the Syrian Army’s Third Armoured Division. Witnesses attest that they were specifically searching for Mustapha. When he enquired as to why they were looking for him, they refused to answer. The armed forces then ordered him to get off the bus and forced him into a security truck.

Mustapha’s family made enquiries about his fate at branches of the Air Force Intelligence and the military police, but have not had any success in locating him to date.

On June 5, 2018, Alkarama and Human Rights Guardians asked that the WGEID urge the Syrian authorities to immediately release the five men or, at the very least, put them under the protection of the law and disclose their fates and whereabouts.