Syria: Extrajudicial Killing of Families Due to Sarin Gas in Khan Sheikhoun in April 2017 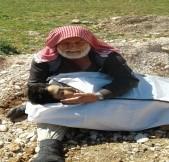 On 4 April 2017, more than 92 Syrian citizens, including women and children, were killed by sarin gas during a Syrian army airstrike on Khan Sheikhoun, north-western Idlib Governorate. The relatives of 12 of them contacted Alkarama and Human Rights Guardians, which in turn submitted their case to Agnes Callamard, UN Special Rapporteur on extrajudicial, summary or arbitrary executions (SUMEX) and to the the Syrian Independent International Commission of Inquiry (CoI).

As witnesses reported, on 4 April 2017 at 6:40 AM, after hearing a radio message announcing an imminent military airstrike by planes coming from Shayrat Airbase in Homs – which hosts the Syrian Air Force 50th Air Brigade – an aircraft struck about four missiles on the town of Khan Sheikhoun. They reported having seen a plane dropping a bomb in the northern neighbourhoods of the town without hearing any sound of explosion, but only seeing smoke and dust rising from the area.

While Syria denied any use of chemical weapons, witnesses accounts, victims’ symptoms as well as weapons remnants, led international NGOs to conclude sarin was the chemical used. Victims’ biomedical samples analysed by the Organisation for the Prohibition of Chemical Weapons (OPCW) also proved that sarin gas was the cause of death. Moreover, the governments of the United States, France and the United Kingdom, among others, concluded that the attack was carried out by the Syrian air forces.

“It is outrageous that the Syrian government continues to resort to chemical weapons against innocent civilians, despite being party to the Chemical Weapons Convention (OPCW) since September 2013. The deaths in Khan Sheikhoun are just the last example of a horrifying pattern,” comments says Inès Osman, Legal Officer responsible for Syria at Alkarama. “Killings caused by chemical weapons may amount to a war crime, and, when used in a widespread and systematic way, to a crimes against humanity as well. Severe violations of this kind cannot go unpunished.”

On 5 May 2017, upon their families request, Alkarama and Human Rights Guardians submitted the deaths of these 12 victims by chemical agents in Khan Sheikhoun to the UN Special Rapporteur on extrajudicial, summary or arbitrary executions (SUMEX), asking her to urge the Syrian authorities to put an end to any attack against civilians and to open prompt, transparent and independent investigations into these cases and to prosecute and punish all those responsible.