Saudi Arabia: Advocacy Campaign on Arbitrary Detention and Prosecution of Human Rights Defenders in the Kingdom 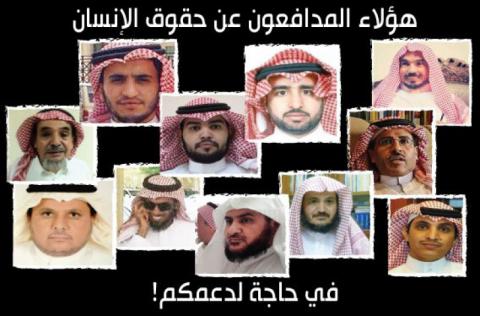 On 12 October 2016, which marks the 7th anniversary of the establishment of the Saudi Civil and Political Rights Association (ACPRA), Alkarama will be launching an international 11-day advocacy campaign - including a letter to the UN High Commissioner for Human Rights as well as an indepth report as well as a campaign video - to raise awareness of the systematic practice of arbitrary detention in Saudi Arabia – where the authorities prosecute anyone critical of the government – and to shed light on the continuing repression and harassment of the 11 members of ACPRA for their peaceful human rights activism.

The work of human rights defenders is intrinsic to the respect of the fundamental rights of all human beings. In Saudi Arabia, however, they are relentlessly prosecuted by the authorities and their activism is considered enmity to the State. Arbitrary detentions, secret trials and lengthy prison sentences are the shared fate of anyone who dares to speak up about Saudi Arabia's human rights record or demand basic freedoms from within the Kingdom. In fact, human rights defenders are systematically targeted for demanding peaceful change and defending those oppressed for having exercised their fundamental rights – including the right to the freedoms of expression, association and peaceful assembly. Alkarama condemns this repression of fundamental civil and political liberties, as well as the prosecution of human rights defenders through which the Saudi authorities have attempted to completely silence its civil society over the past years.

ACPRA has worked relentlessly to peacefully denounce human rights violations within the Kingdom and has helped victims file legal claims against the responsible authorities. The association has also advocated for a constitutional monarchy, an independent judiciary, broader freedoms, and repeatedly called upon the authorities to respect the fundamental civil and political rights of all Saudi citizens, including the respect of fair trial guarantees. In 2012, as the Saudi authorities began cracking down on ACPRA, its 11 members – all prominent human rights defenders – were all subjected to reprisals and became themselves victims of arbitrary detention for having reported cases of violations and cooperated with the United Nations human rights mechanisms. In March 2013, ACPRA was banned and as of 2016, all 11 members have been harshly prosecuted and sentenced to heavy prison terms, from four to 15 years. Most of them are, to this date, still serving their sentence.

It is of utmost importance that Saudi Arabia put an end to the institutionalised reprisals and practice of arbitrary detention against human rights defenders and respect, protect and guarantee the right to freedom of expression, peaceful assembly and association for all individuals in the Kingdom. The legitimate and peaceful exercise of those rights cannot be considered as a criminal act and should under no circumstances be prosecuted under the Anti-terrorism legislation. The work of individuals, such as ACPRA members, in promoting civil and political liberties and documenting cases of human rights violations is crucial to the rule of law and prosperity of the Saudi society and it should be endorsed and supported by the government instead of being condemned and prosecuted.