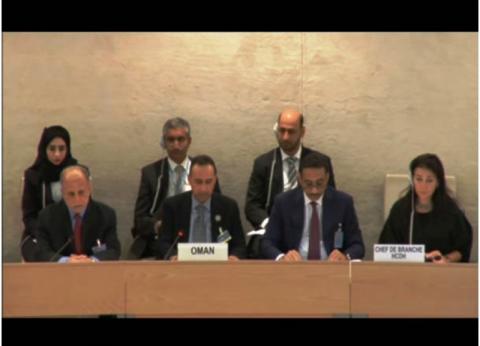 On 10 November 2015, the Working Group on the Universal Periodic Review (UPR) adopted a draft report containing the recommendations made by United Nations Member States to Oman during the State's review, which took place on 5 November 2015. During the review, States expressed their concern over the human rights' situation in Oman, especially regarding violations of the rights of peaceful assembly and freedom of expression, the Nationality Code and the lack of ratification of international human rights instruments by the country, issues previously raised by Alkarama in its report submitted on 23 March 2015 to the UN Human Rights Council (HRC).

Violations of fundamental rights and freedoms

In its submission, Alkarama denounced Oman's repression of peaceful demonstrators, human rights activists, journalists and bloggers who publicly criticise government policies, highlighting the case of parliamentarian Talib Al Mamari, who will receive the 2015 Alkarama Award for Human Rights Defenders in the Arab World, in recognition for his significant work defending human rights in the country. Al Mamari was arrested in October 2013 for taking part in peaceful demonstrations against the pollution of petrochemical industries in Liwa and remains in prison to this day, despite an Opinion issued in November 2014 by the UN Working Group on Arbitrary Detention (WGAD) requesting his immediate release.

Alkarama also mentioned the strict limitations that Omani law imposes on the freedoms of peaceful assembly and association, as well as on the freedoms of opinion and expression, a concern shared by UN Special Rapporteur on the rights to freedom of peaceful assembly and of association (SR FPAA), Maina Kiai. In fact, after returning from a visit to Oman, from 8 to 13 September 2014, Mr Kiai stated that the right to freedom to form associations is virtually non-existent in Oman, as the 1972 Law on Associations makes it impossible to establish an association without government consent.

In view of these facts, 16 UN Member States, including Canada, Switzerland and the Netherlands, recommended Oman to ensure the full enjoyment of the rights to freedom of expression, association and peaceful assembly, especially by amending its legislation in order to remove the limitations imposed on the enjoyment of these rights and freedoms.

Nationality Code used as a tool for discrimination and reprisals

The Omani Nationality Code discriminates against Omani women, imposing several limitations on their right to transmit Omani citizenship to their children. A 2014 amendment to the Code even authorises the forfeiture of Omani nationality of any citizen who damages the State's image abroad, including through collaboration with "international organisations", a provision that can be used to punish human rights defenders working internationally.

Oman is neither a party to the International Covenant on Civil and Political Rights (ICCPR) nor to the Convention against Torture (UNCAT) and during the country's first UPR, recommendations on the ratification of these instruments were merely "noted" by the State. Furthermore, Omani authorities refuse to cooperate with the UN's human rights protection mechanisms, as numerous urgent appeals and allegation letters transmitted to the authorities by the UN Special Procedures remain unanswered. In view of these facts, during the second UPR, 14 States called upon Oman to ratify the ICCPR and 12 recommended that OMAN ratify the UNCAT.

Oman must now examine the 232 recommendations it received from UN Member States before March 2016 and work on the implementation of the accepted recommendations. Alkarama, therefore, calls on the Omani authorities to accept and fully implement recommendations requesting the State to:
• Ratify the International Covenant on Civil and Political Rights (ICCPR) and the Convention against Torture (CAT);
• Ensure freedom of opinion and expression in accordance with international standards and decriminalise free expression and peaceful protest against the government;
• End reprisals against human rights defenders and peaceful activists; lift all travel bans; cease confiscating identity documents; and release all those detained for participating in peaceful activities.