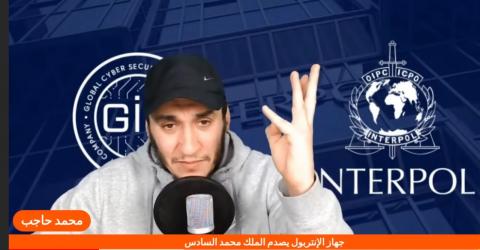 The International Criminal Police Organization (Interpol) overturned a notice to arrest prominent German-Moroccan activist Mohamed Hajib appeals to the international body, which in turn ruled that Hajib had merely exercised his right of expression and opposition as a citizen.
The Moroccan prosecutor's office issued an international arrest warrant against Mr. Hajib for his opposition to Moroccan authorities.
Mr. Hajib had previously been arrested in Morocco, and remained in detention for a period of 7 years, and was released on 17 February 2017, after Alkarama treated his case through UN human rights mechanisms. He later returned to Germany and opened a page under his name on Facebook and began posting videos on the YouTube platform criticizing the Moroccan authorities and the Monarchy.
Morocco called on German authorities to prosecute him for allegedly inciting "terrorist" acts and inviting the Moroccan people to participate in demonstrations, but the German judiciary found that he had only used his right to oppose in a peaceful manner. Following the Moroccan government's failure in these proceedings with German authorities, the Moroccan government issued an international arrest warrant against him.
Ultimately, the Interpol Monitoring Committee decided to revoke this arrest warrant based, as part of its reasons for overturning the decision, on a publication of a decision of the former United Nations Working Group on Arbitrary Detention related to Mr. Hajib's case.

Earlier, on 26 July 2011, Alkarama had written to the UN Working Group on Arbitrary Detention regarding the case of Mr. Hajib after he was arrested at Casablanca airport in February 2010 while coming from Frankfurt, Germany, and subsequently detained. He was tortured and forced to sign a confession on the basis of which he was sentenced to 10 years in prison.

In November 2012, after receiving a submission from Alkarama on the case of Mohamed Hajib, the UN Working Group on Arbitrary Detention considered his arrest as arbitrary because of his "conviction on the basis of confessions extracted under torture" and called on the Moroccan government to "release him immediately and compensate him adequately".
In its decision on Mr. Hajib's case, the UN Working Group said that "the Moroccan government limited its response by denying that it extracted confessions under torture and without providing evidence that it had conducted independent and transparent investigations into the allegations against him or without providing material evidence against the accused during the trial, and that the confessions on which they were based were obtained in the absence of a defense lawyer".
As part of its efforts to defend Hajib's rights, Alkarama submitted, on 30 October 2018, a communication the UN Committee Against Torture regarding the case of Mohamed Hajib in the hope that the Committee would urge the Moroccan government to conduct a thorough investigation into all the violations, including torture, to which the victim was subjected, and to obtain compensation for the serious harm suffered.