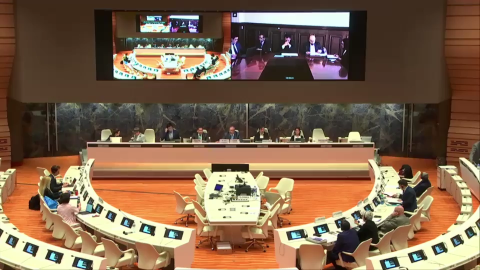 On 24 February 2022, Alkarama addressed the UN Committee on Enforced Disappearances regarding the situation of three Iraqi brothers Aqil Khalil Hamid Ibrahim, Emad Khalil Hamid Ibrahim and Falah Khalil Hamid Ibrahim who were arrested at their home on 31 January 2014 by the military and have been missing since. While their family lost hope of finding them alive, one of the three brothers was seen in a detention center

The Ibrahim brothers were arrested on January 31, 2014 at their home in the Al-Rasheed Al-Siyafiya neighborhood of Baghdad by soldiers belonging to the 17th Division of the 23rd Army Brigade.  Heavily armed and in uniform, they arrived in several Hummer and Savador vehicles.  A dozen of them then entered the victims’ home and arrested them in front of their families and neighbors without providing any explanations. They were then taken to an unknown destination.

Despite the steps taken by their relatives with the various Iraqi authorities their fate remained a mystery. It was not until eight years later, on February 6, 2022, that their family was contacted by a former detainee, released in January, who informed them that he had recently been held in the same prison as one of the three brothers, Falah Khalil Hamid Ibrahim. The latter reported that they were in one of the detention centers of the 23rd Brigade located in the area of "Mahmoudiya" (south, Baghdad).

The former detainee testified that he was subjected to severe torture in detention as were all the detainees in the center; he reported being hung from the ceiling for long hours, beaten with cables and subjected to electric shocks on different parts of his body.

Deeply affected by this testimony, Falah Khalil Hamid Ibrahim's family asked Alkarama to try to save the three victims by sending an urgent action to the United Nations Committee on Enforced Disappearances to intervene with the Iraqi authorities.