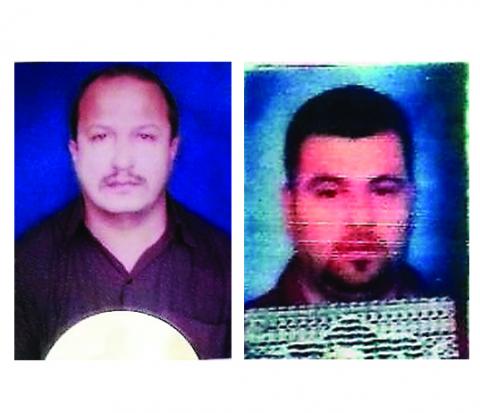 Ahmed Al Husseini and Mohammad Al Shahwani were both arrested at checkpoints controlled by the Hezbollah Brigades in 2015. The Hezbollah Brigades are part of the Popular Mobilisation Units (PMU), an umbrella organisation of militias that falls under the state’s authority, and which was formally included in the country’s security forces on March 8, 2018.

On June 15, 2015, 43-year-old taxi driver Ahmed Al Husseini was arrested at a checkpoint located in the town of Musayib, in the Babil governorate. At the time, Al Husseini was transporting a passenger from Baghdad to Mosul. The Hezbollah Brigades arrested more than 80 other people also commuting between the two cities via the Musayib checkpoint on the same day. The militiamen blindfolded the detainees before transferring them by bus to the industrial zone of the neighbouring town of Alexandria.

In the context of the liberation of Mosul from the Islamic State (IS), the Al Husseini family lodged a complaint with the Province Council of the Nineveh governorate on May 24, 2017, and tried to look for Ahmed’s name in the detainees’ registry of several detention facilities, but these steps proved unsuccessful.

In early July 2018, several news outlets estimated that around 15,000 people from Mosul had been arrested. It was reported that many of them had been wrongfully arrested as they bore the same names as individuals wanted by the security services. In a picture released by the information website Rudaw addressing this matter, Al Husseini’s family believes to have identified him among dozens of other prisoners confined in an overcrowded cell.

Six months later, on December 6, 2015, Mohammad Al Shahwani, a 31-year-old truck driver, was arrested by the Hezbollah Brigades at the “Bzebiz checkpoint”, located in the town of Sadr Al Yusufiyah. On that day, Al Shahwani was attempting to retrieve his business vehicle from a parking lot in Baghdad. Since the day of his arrest, his relatives have not received any information on his fate and whereabouts.

On May 24, 2017, Al Shahwani’s parents lodged a complaint with the investigating judge of Mosul regarding the disappearance of their son. As a result, on July 14, 2017, the judge referred the case to various security agencies including the police department of the Nineveh governorate, but to no avail.

In light of the above, Alkarama and Al Wissam Humanitarian Assembly requested the urgent intervention of the CED to call upon the Iraqi authorities to immediately release Ahmed Al Husseini and Mohammad Al Shahwani or, at the very least, to bring them under the protection of the law and inform their relatives of their fates and whereabouts.