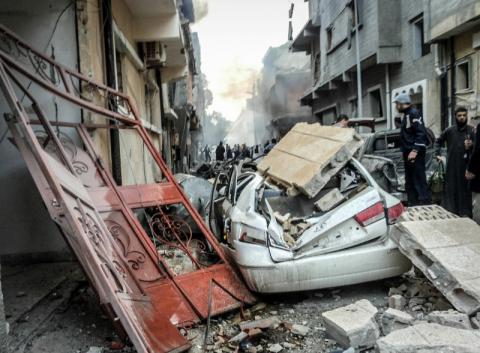 On 4 March 2015, Alkarama called on the United Nations Special Rapporteur on Summary Executions (SUMX) regarding the arbitrary executions of seven civilians during the Egyptian military operation on the Eastern Libyan coastal city of Derna on 16 February 2015. Amongst the victims were Rabha Saleh Ahmed Al Mansouri, 44, and three of her children, Afrah, 7, Huzaifa, 2 and Zakaria, 6. Only Mrs Al Mansouri's husband and their 8-year-old son survived the bombing of their house by the Egyptian army.

On 15 February 2015, Islamic State of Iraq and the Levant (ISIL) militants in Libya released a video showing the beheading of 20 Egyptian Christian Copts and one foreigner on the Libyan shores, acts that have been strongly condemned by the international community and Alkarama. In retaliation for these heinous crimes, on 16 February 2015 the Egyptian government launched – with the approval of the Libyan authorities in Tobruk – a series of airstrikes supposedly over ISIL's weapons stockpiles and training camps in Libya.

However, some missiles launched on the Al Shiha neighbourhood, a densely populated area of Derna, killed seven civilians and gravely wounded at least 17 others. Amongst the victims were Mrs Al Mansouri and her three children who died after a missile hit their four-story house.

The other reported civilians who died during the airstrikes were Attia Bousheiba Al Shari, whose body was found under the rubble of his house, Osama Al Shteiwi who hit by shrapnel as he was looking at the airstrikes from his rooftop, and Hanan Faraj Al Drissi, killed in the streets after the launch of a missile on a nearby house.

In total, 18 houses were partially or entirely destroyed and 32 damaged in what appears to have been a disproportionate destruction of civilian property, leading not only to great suffering but also to unlawful killings. The Egyptian authorities denied having targeted civilians, declaring that "Egypt considers and abides by international agreements and standards, and the targets against this terrorist organisation were carefully chosen, as the airstrike focused on the training camps and weaponry reserves of terrorist organisation IS."

However, the missiles launched on Derna did not reach their target, as they did not affect ISIL militants but only civilians. It therefore appears that the Egyptian army did not take all necessary measures to ensure that civilians and civilian buildings would not be hit by missiles, in complete violation of the fundamental principles of International Humanitarian Law (IHL), which prohibits attacks on civilian properties as well as attacks that do not discriminate between combatants and civilians.

Moreover, the justifications given by Egyptian officials regarding the airstrikes on Derna are insufficient to prove that the deaths of these civilians were not unlawful and wanton, which could amount to a war crime according to the Rome Statute of the International Criminal Court (ICC), the international body competent for crimes committed in Libya since 2011 as decided by the UN Security Council (UNSC) Resolution 1970.

In light of the information provided regarding the Al Mansouri family, Alkarama solicited the UN Special Rapporteur on Extrajudicial, Summary or Arbitrary Executions (SUMX) to ask the Egyptian and Libyan authorities to (i) open a thorough and independent investigation into the conduct of the 16 February 2015 airstrikes and (ii) prosecute those responsible for these arbitrary killings for commission of war crime. In the future, the Egyptian authorities should refrain from intervening on the Libyan territory without prior authorisation from the UNSC, as requested in Chapter VII of the UN Charter.