Djibouti: Excessive Use of Force by the Police and the Army and Assaults of Members of the Opposition 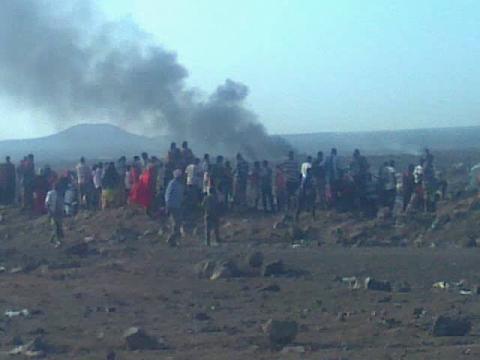 On 21 December 2015, at dawn, the police and the Djiboutian army violently dispersed a religious ceremony in Balbala, near Djibouti City. Although it is still difficult to estimate the number of casualties and injuries, it appears that the State forces used lethal force in a disproportionate manner. The same day, new violations were reported during the police raid of an opposition member's home, leading to the hospitalisation of several members of the opposition coalition, the National Salvation Union (USN). Condemning such acts, Alkarama will seize the UN Special Rapporteur on extrajudicial, summary or arbitrary executions (SR SUMX) with a view to call for the opening of an independent and impartial investigation into these events.

On 21 December, numerous members of the community Yonis Moussa − belonging to the Issa clan − met in Balbala, a border area of Djibouti city, to participate in a religious ceremony when the police intervened to disperse them, without any apparent reason. Faced with the community members' resistance, the police used force and live ammunition against participants and was then supported by the army and particularly by the Republican Guard. While the official figures and those of the opposition differ, it appears that numerous civilians died and dozens of people, including police officers, were injured.

Based on the preliminary reports and the risk of escalation of violence that may result from such events, it is essential to open an independent and impartial investigation and that those who have committed offenses are prosecuted and judged. The European Union, through its External Action Service's spokesperson, also made a request to this end and called on the authorities to respect the rule of law.

This is all the more important that, in the afternoon, the police raided the home of another USN member, Djama Amareh Meidal, where an opposition meeting was taking place. While the police yet again made use of lethal weapons and tear gas against those present, Said Houssein Robleh, a deputy regularly harassed by the authorities, Ahmed Youssef Houmed, president of the USN and Hamoud Abdi Souldan, former Minister of Muslim affairs, were injured and had to be urgently hospitalised at the French military hospital Bouffard. Still under intensive care, they risk being arrested after their hospitalisation, as the authorities have launched numerous crackdowns against the opposition since the current President Ismail Omar Guelleh formalised his candidacy for the upcoming presidential election in April 2016, where he will run for a fourth consecutive term.

"The tragic events of 21 December show that the authorities have passed a milestone in the repression, this time targeting a peaceful religious ceremony and thereafter making use of lethal force against opposition members," said Rachid Mesli, Legal Director at Alkarama. "Such incidents must be investigated and cannot go unpunished, as they risk to be trivialised and episodes of violence risk to be multiplied."

Given the social and political situation in Djibouti and the upcoming elections, Alkarama will continue to monitor the human rights situation in the country and document the violations committed on 21 December with the UN Special Rapporteur on extrajudicial, summary or arbitrary executions (SR SUMX) in order to open an independent and impartial investigation. The authorities must ensure that any person can freely express their opinions and assemble peacefully, in accordance with the articles of the International Covenant on Civil and Political Rights (ICCPR), ratified by Djibouti in 2002.