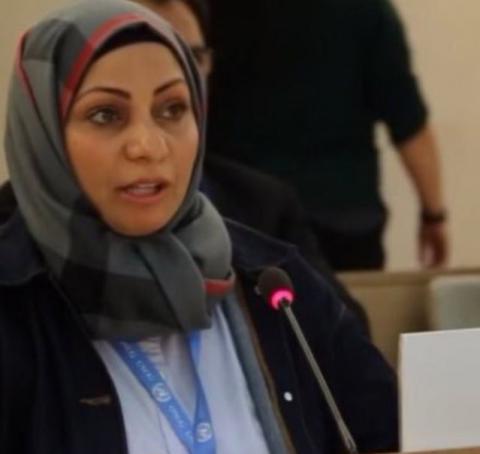 Alkarama strongly denounces the continuous crackdown in Bahrain against human rights defenders and political activists as well as the authorities’ use of trumped up charges in order to silence them. Gulf countries have been seemingly following the same trend of accusing rights activists and dissenting voices of “terrorism” in order to intimidate them and stun their activities.

Such fear mongering tactics have become the norm. Activism is not a crime and human rights defenders should not be punished for merely speaking out about the abuses of their government and for denouncing State perpetrated crimes against their fellow citizens.

Furthermore, and as the UN has repeatedly stated, collaborating with international human rights organisations and UN human rights mechanisms should never be a reason for retaliation by the authorities.

Alkarama deeply regrets to see its name mentioned as the basis for the groundless charges against Ebtisam Al Saegh. We recall that Bahrain has international obligations it has voluntarily adhered to by ratifying a number of conventions including the International Covenant on Civil and Political Rights, which imposes the respect of fundamental freedoms of its citizens, including their right to freedom of expression, peaceful assembly and association and prohibits arbitrarily detaining and torturing citizens.