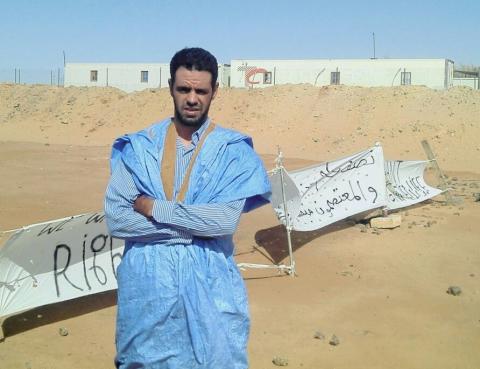 During the 134th session held in Geneva from February 28 to March 25, 2022, the UN Human Rights Committee has, once again, concluded that the Algerian authorities are responsible for the violations committed by Polisario agents against a Sahrawi refugee, M'Rabih ADDA, in the camp of Tindouf (southeast Algeria).

The UN body finally rendered its decision in favor of the victim defended by Alkarama who filed a complaint on behalf of the victim on 12 June 2015.

In a previous case submitted by Alkarama, in which one of the founders of the Polisario Front, Ahmed Khalil Mahmoud Braih, was abducted in the center of Algiers by Algeria’s Intelligent Servvices agents (DRS) and had disappeared since then after being detained in the military prison of Blida, the UN committee of experts had also concluded the responsibility of the Algerian government.

According to his relatives, Ahmed Khalil Mahmoud Braih was particularly critical of human rights violations committed with impunity by the Polisario leadership in the refugee camps in the Tindouf region.

Reminder of the facts

Refugee from the camps of Tindouf, M'Rabih ADDA, co-founder of the association "Assoumoud" and the movement of "March 5", was arrested in Tindouf by agents of the DRS on 25 July 2014 following a sit-in protest against the Polisario Front in front of the Office of the High Commissioner for Refugees to demand the right to freedom of expression and movement as well as dignified living conditions for refugees in Tindouf.

The evening of his arrest, after being tortured, he was handed over by the DRS to Polisario agents and taken to the detention center "Errachid" known by the refugees of the camps as a torture center.

Held incommunicado for 14 days, he was interrogated about his political activities and severely tortured. He was suspended by his wrists, beaten with sticks, and deprived of sleep and food for several consecutive days for refusing to read a statement prepared by his torturers in which he "acknowledged his mistakes" and testified to "having been recruited by Morocco”. After more than two months of torture, exhausted, he finally gave in and read a "confession" filmed by Polisario agents, committing himself to cease all political activity.

Finally released, the victim had to flee the camps to Mauritania where part of his family lives.

Algeria, responsible for violations throughout its territory

In its complaint to the Committee, Alkarama had argued that all the violations committed in the refugee camps of Tindouf can be attributed to Algeria by virtue of its sovereignty and its obligation to ensure respect for human rights throughout its territory.

The Human Rights Committee finally ruled in this sense and rejected all the arguments of the authorities in Algiers by declaring that the de facto devolution of the powers of the State party to the Polisario and the administration of the refugee camps by the latter does not exonerate it from its responsibilities.

The UN experts thus reaffirmed Algeria's obligation to protect and ensure respect for all the fundamental rights of all persons under its jurisdiction, regardless of their status, by virtue of the principle of territoriality and in accordance with Article 2 of the International Covenant on Civil and Political Rights, ratified in 1989.

According to the Committee, it is therefore incumbent on the State party to ensure that all persons have access to effective and enforceable remedies to claim the rights guaranteed by the Covenant.

Violation of the victim's right to liberty and security

Alkarama also raised the issue of the violation of the right to liberty and security of person, a right enshrined in article 9 of the Covenant which prohibits arbitrary arrest and detention by imposing a number of procedural guarantees on the State party.

In this case, the DRS agents who arrested M'Rabih Adda did not specify the reasons for his arrest nor did they present him with any warrant. He was then illegally kept in detention by Polisario agents well beyond the maximum legal period of 12 days and was therefore never brought before a competent judicial authority in order to rule on the legality of his detention.

The experts thus concluded that the State party was responsible for the violation of the victim's right to liberty and security of person under article 9 of the Covenant.

The Committee notes the cruel, inhuman and degrading treatment committed by the Polisario agents

With regard to the 14-day incommunicado detention, the independent experts recognized that this constitutes a form of torture under article 7 of the Covenant, given the "degree of suffering involved in such deprivation of liberty without contact with the outside world for an indefinite period of time”.

The Committee also stated that the torture inflicted on the victim is, in addition to being contrary to article 7, a violation of his right to be treated with humanity and with respect for the inherent dignity of the human person as guaranteed by article 10 of the Covenant.

During the examination of the complaint, the Committee also rejected all the conclusions of the Algerian authorities who thought they had to avoid their responsibilities by not responding to the facts of violations reported by Alkarama with relevant legal arguments and by seeking to politicize the complaint with accusations and personal attacks directed against Alkarama and its director, Mr. Rachid MESLI.

In response to the official response of the Algerian authorities, which was unfounded, lacking in relevant legal arguments and completely unrelated to the content of the complaint, the UN experts noted that "the State party has not responded to the author's allegations on the merits" and thus recalled the obligation of the State party to collaborate with the procedure in accordance with its international commitments.

The Committee therefore concluded that the authorities in Algiers were fully responsible for the violations suffered by M'Rabih Adda and urged them to carry out, within the allotted time, a "prompt, effective, thorough, independent, impartial and transparent investigation" into the violations, and to provide an effective remedy to the victim by granting him full reparation.

Alkarama will monitor the effective follow-up of this important decision in collaboration with the UN Human Rights Committee and will pay particular attention to the way the authorities concerned will implement it.